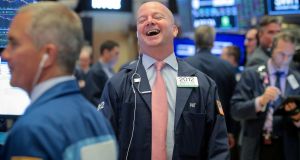 Global stock markets were buoyed on Monday as a thaw in the US-China trade dispute lifted market sentiment and spurred a rally in equities.

European shares surged to their highest in nearly two months while the FTSE 100 reached a more than nine-month high. Irish shares outperformed their peers.

In the United States, Wall Street’s main indices surged to a new high on opening thanks to rising technology stocks on the back of a possible reprieve for Huawei.

Among those, Smurfit Kappa was the biggest gainer, rising 3.53 per cent to €27.55 having lagged on Friday. Index heavyweight CRH also provided a boost to the index after gaining 1.74 per cent to €29.19.

Flutter Entertainment/Paddy Power was the biggest gainer on the smaller Iseq 20, up 4.26 per cent to €68.96.

Ryanair was flat on the day at €10.11 on the back of broker downgrades for some industry peers that put pressure on the sector.

The FTSE 100, which in June enjoyed its best month since January, surged 1 per cent while the mid-cap FTSE 250 climbed 0.9 per cent.

Investors piled into equities, especially those of banks with a big presence in Asia such as HSBC and Prudential. Shares of miners, sensitive to news surrounding top metals consumer China, also boosted the main index.

Demand for commodities such as gold waned as investors flocked to stocks and the US dollar, leading to a 1.6 per cent drop in the shares of precious metals miner Fresnillo.

The pound, however, was pressured after the dollar firmed and as data showed British manufacturers suffered the sharpest fall in activity in more than six years last month, highlighting the toll a protracted Brexit process has taken on the country.

In one of the few news-driven moves, media services company Future Plc climbed nearly 7 per cent on the mid-cap index after it forecast full-year results that were ahead of previous expectations. Stagecoach slid 7.6 per cent after Deutsche Bank cut its price target for shares in the train and bus operator.

The pan-European Stoxx 600 index rose 0.8 per cent on broad-based gains, while Frankfurt’s trade-sensitive DAX rallied 1 per cent, the most among the major European indexes.

Infineon, Siltronic, Ams, STMicroelectronics and ASM International rose between 3.7 per cent and 5.6 per cent.

Atlantia fell 3.2 per cent and was among the few decliners on the Stoxx 600 as it battled with the ruling 5-Star party over selectively leaking a government report to revoke the group’s national toll-road concession that accounts for a third of its core profits.

Tech stocks, which are Wall Street’s top performers so far in 2019, jumped 1.57 per cent, with heavyweight Apple’s 2.5 per cent gain providing the maximum support.

Chipmakers with a sizable revenue exposure to China jumped, fuelling a 3 per cent gain in the Philadelphia Semiconductor index .

Gains on the Dow index were limited by a 0.7 per cent drop in Boeing after a report that federal prosecutors had subpoenaed records relating to the production of the 787 Dreamliner in South Carolina.

A rise in oil prices lifted energy stocks by about 1 per cent.

Wynn Resorts jumped 7.2 per cent, the most on the S&P, as gambling revenue in the Chinese territory of Macau rose more than expected in June. – Additional reporting: Reuters