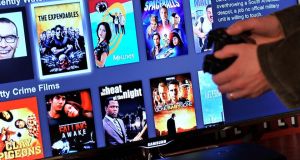 
Stocks rose yesterday as data emerged showing confidence is up in a number of European economies and in the US.

Traders in Dublin also reported a busy day with activity in a number of leading shares, including Smurfit and Ryanair.

A gauge of economic confidence in the euro area rose for an 11th straight month in March to its highest level since July 2011. In Germany, research company GfK forecast that its consumer-confidence index will remain at a seven-year high in April, while the conference board painted a similar picture of US sentiment.

DUBLIN
International packaging group, Smurfit Kappa , shed 4.8 per cent to €17.75 in one of the biggest moves of the day. The slide wiped out all the gains made by the stock during a run that began midweek and saw it hit €19.20. Traders said internal industry reports indicating a weakness in pricing were to blame for the fall.

Bank of Ireland was given some respite from a recent bout of selling, adding 3.13 per cent to 29.7 cent. Drinks group C&C also gained ground after a few days that saw more sellers than buyers in the stock. It climbed 2.08 per cent to close at €4.77.

There was some activity in recently floated Dalata Hotel Grou p, which gained ground in the morning, adding more than 1 per cent, but ultimately closed flat at €2.94. Ryanair shed 1.05 per cent to close at €7.52, a drop that traders put down to profit taking following several days of increases in the Dublin-based carrier’s price.

LONDON
Miner Glencore Xstrata added 2 per cent to 313.3 pence. A nglo American gained 1.5 per cent to 1,509 pence. The FTSE 350 Mining Index climbed 1 per cent as copper headed for its biggest weekly gain in six months on speculation that top user China will take further steps to bolster economic growth.

While mining stocks surged, insurers tumbled as the Financial Conduct Authority announced plans to scrutinise treatment of long-standing customers in the life-insurance market. Resolution sank 7.1 per cent to 296.3 pence and Aviva lost 2.8 per cent to 470.2 pence. Legal and General dropped 3.5 per cent to 205 pence. Irish home improvement and builders’ merchants group, Grafton , which is listed in London, shed 2.2 per cent to close at 644 pence.

Smith & Nephew advanced 2.4 per cent to 921.5 pence. Investec raised its rating on the medical-device maker to buy from add, saying that breaking it up could create value.

EUROPE
Intesa Sanpaolo rallied 3.5 per cent to €2.40. Italy’s second- biggest bank forecast dividend payouts of €1 billion this year and €2 billion next. The lender also said its fourth-quarter loss widened to €5.19 as it wrote down goodwill and set aside more money for bad loans.

Italian lenders advanced after borrowing costs fell at a sale of five- and 10-year government debt. Banco Popolare SC jumped 7 per cent to €18 and Banca Monte dei Paschi Siena climbed 4.4 per cent to 25.3 cent. Pirelli climbed 3.2 per cent to €11.58 after reporting 2013 earnings before interest and taxes of €791 million, beating the €789 million average analyst projection.

Deutsche Wohnen advanced 1.1 per cent to €15.54 after saying funds from operations, excluding divestments, a measure of a property company’s ability to generate cash, climbed 68 per cent from a year earlier to €114.5 million.


NEW YORK
US stocks fell, with the biotech sector leading the way down. Gilead Science shares were off 3.3 per cent at $69.03 and Biogen Idec shares were down 4.1 per cent at $297. The two stocks were the S&P 500’s biggest fallers. Netflix continued its downward trend, slipping 1.6 per cent to $358.50, leaving the online rental movie firm facing its 16th fall in 18 trading sessions.