UK pound stronger against both euro and dollar 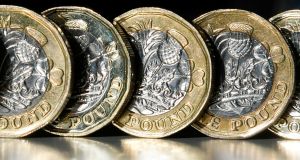 Sterling edged higher on Friday and is poised to post gains for a third consecutive week as markets interpreted latest comments from top EU policymakers as mildly positive for Brexit negotiations though gains were capped.

With general dollar weakness across the board in a week shortened by holidays in the US and Japan, the British pound rose 0.2 per cent to $1.3327 and closing in on key technical levels. Against the euro, it was trading 0.2 per cent higher at 0.8907p.

“EU Juncker’s comments today was taken as a sign that negotiations with the EU were progressing to the next stage but markets are not ready to take big bets yet as the asymmetric bets are large,” said Thu Lan Nguyen, analyst at Commerzbank.

The president of the European Commission Jean-Claude Juncker said on Friday that a meeting with British prime minister Theresa May on December 4th will allow the EU to see whether sufficient progress was made on Brexit talks.

Sterling is flirting with some key levels on the charts as well against the dollar.

If it breaks above the $1.3330 line, which it has tried three times earlier over the last few weeks but has been unsuccessful it can quickly rally up to the late September highs of $1.3347 and beyond.

The recent rise in sterling hasn’t been accompanied by a rapid build up in positions, indicating that investors were still underweight on the British currency.

“We are near some very important technical levels on sterling here,” said John Marley, head of FX strategy at Infinity International, a currency risk management firm.