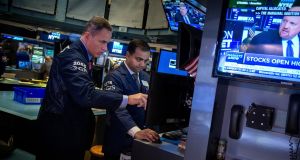 Trading volumes were thin on the New York Stock Exchange ahead of the Thanksgiving holiday on Thursday and an early close on Friday. Photograph: Michael Nagle/Bloomberg

European shares slipped after two days of gains on Wednesday, led by the Dax, which was hit by a bounce in the euro as well as deadlock in attempts to form a new German government.

The pan-European STOXX 600 benchmark closed 0.3 per cent lower, with the Dax falling 1.2 per cent following strong gains in the previous session. The euro was up 0.4 per cent against the dollar.

The UK budget, which had been a key focus of the day, failed to impress and had a limited impact on the broader market, though remarks from finance minister Philip Hammond highlighting Britain’s economic weakness briefly weighed on the pound, supporting the export-oriented FTSE index.

The Iseq fell 42 points to 6,879, shadowing the downturn elsewhere. Along with other stocks in the sector, Ryanair fell 2.1 per cent to €17.58. The only airline to buck the EU-wide slump was EasyJet, which posted full-year results. Housebuilder Cairn also fell 2 per cent to €1.71, which one trader put down as “straight read-through” from the UK, where housebuilders were underwhelmed by moves in the budget to trigger an uptick in supply.

Swiss-Irish food group Aryzta rose 3 per cent to €26.57 after the company announced the proposed renewal of its two-year authority to issue share capital would not be used to compensate senior staff, allaying investor concerns.

The FTSE 100 ended the session just 0.1 per cent higher at 7,419.02 points as sterling recovered and headed higher, though the blue chip index still outperformed a negative European market.

Mr Hammond, walking a tightrope between managing weak public finances and offering sweeteners to win back voters, had little room for the bold moves demanded by many in his Conservative party to help households after years of spending cuts. Sterling fell sharply on the growth downgrade before bouncing back, and the FTSE traded just off its earlier highs.

Housebuilders hit a session high, up 1.6 per cent, before falling back to end the day down 0.3 per cent after Mr Hammond said the government would review unused planning permissions and consider compulsory purchases if sites were being withheld for commercial rather than technical reasons.

Barratt Development, Persimmon and Berkeley were among the worst-performing FTSE stocks, down 1.9 per cent to 3.7 per cent. “On one hand it’s going to encourage housebuilders to use their land bank . . . but if you are suddenly getting a flood of properties or land banks being used in the short term, the market might think it could depress prices,” said Paul Mumford, UK fund manager at Cavendish Asset Management. The benefits from the stamp duty exemption could trigger demand in the short term, he said.

The biggest Stoxx decliner was debt-laden telecoms and cable group Altice, which dropped to its worst level since 2014, closing down 8.8 per cent. The top gainer was travel location food outlet operator SSP Group after it beat expectations for full-year results and proposed a special dividend. Its shares rose 8.6 per cent to a record high.

Energy was among the biggest sectoral gainers in Europe, up 0.4 per cent and led by Tullow Oil as oil prices remained near a two-year high, while consumer goods were the biggest decliners.

Akzo Nobel rose 1.3 per cent after it called off a merger of equals with US coatings company Axalta. Norwegian media group Schibsted fell 6.7 per cent following a share issue to bolster its capital and pay for possible market consolidation in online classifieds.

Wall Street indexes treaded water, staying near record levels, in late morning trading on Wednesday as technology and energy stocks battled for influence and investors awaited the minutes of the Federal Reserve’s latest policy meeting. The S&P technology index fell 0.26 per cent, after two days of gains, led by losses in Hewlett Packard Enterprise after Meg Whitman said she would leave as chief executive in February, six years into the job. HP Enterprise fell more than 9 per cent. HP Inc, which holds the computer and printer business that Whitman carved out of the old Hewlett Packard, fell 8 per cent after reporting an unimpressive profit. The energy index rose 0.62 per cent as US crude prices jumped 1.7 per cent, easing only slightly from more than two-year highs after data showed US crude stocks declined largely in line with expectations. Trading volumes were thin ahead of the Thanksgiving holiday on Thursday and an early close on Friday. – Additional reporting by Reuters