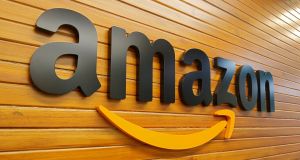 Ireland’s top share index fell on Monday led lower by Bank of Ireland and Ryanair amid a retreat in European shares as industrials and tech stocks slipped and disappointing earnings dented investor confidence.

US indices fell as disappointing forecasts from a clutch of technology and internet companies fuelled worries about the continued growth of the high-flying tech sector.

Ryanair fell 2.19 per cent to €14.10 having invited its Irish pilots’ union to talks in anticipation of a fourth strike. The carrier’s invitation came as German pilots working for Ryanair voted to strike

Elsewhere on the Irish market, above average volume was recorded in Glenveagh properties and Independent News & Media. Glenveagh fell 0.36 per cent to €1.116 while INM rose 1.94 per cent to €0.0945.

The blue-chip FTSE 100 index ended the session flat in percentage terms, slightly outperforming a broader decline among European stocks at the start of a week where central bank policymaking will be in focus.

Shares in GVC Holdings were a bright spot, however, jumping 5.4 per cent to the top of the index after the British gambling company agreed a joint venture with US hotel and casino operator MGM Resorts International to set up an online betting platform in the United States.

Vodafone provided the biggest individual boost to the FTSE, its shares up 3.6 per cent with traders citing a report that activist investor Elliott has taken new stake in the company.

More broadly, a decline across commodities-related stocks weighed on the FTSE.

The pan-European STOXX 600 fell 0.3 per cent, starting a packed earnings week on the back foot after sealing on Friday its strongest weekly gain in nearly five weeks. Germany’s DAX edged down 0.5 per cent.

Shares in Heineken tumbled 6.5 per cent to the bottom of the STOXX after the world’s second largest beer maker reported weaker than expected first-half earnings and cut its full-year margin guidance.

France’s Air Liquide fell 2.5 per cent to the bottom of the CAC 40 after its first-half operating income proved disappointing.

Deutsche Bank shares rose 2.9 per cent after the German lender said it had moved a large part of its euro clearing activity to Frankfurt from London.

Gains by energy companies, as oil prices rose, and bank stocks ahead of the Federal Reserve meeting helped the benchmark S&P 500 cut its losses. The technology index tumbled 1.65 per cent, falling more than 1.5 per cent for the third straight day as underwhelming results from the likes of Facebook and Netflix spooked investors about the prospects of a sector that has led the equity market to record highs.

Facebook dropped 4.3 per cent and Netflix slid 4.6 per cent. Amazon declined 1.2 per cent and Alphabet dropped 1.5 per cent despite both reporting healthy results.

American Express fell after the Wall Street Journal reported the company raised currency conversion rates for its business clients without notifying them.