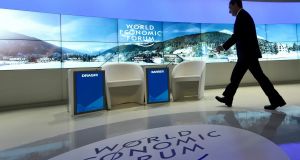 Mario Draghi in Davos: the European Central Bank president’s remarks helped to buoy markets on Thursday and the trend continued to the end of the business week. Photograph: Jean-Christophe Bott/EPA

Stocks continued their rebound on growing investor confidence triggered by indications from EU banking chief Mario Draghi that more support for the market is on the way in March.

The European Central Bank president’s remarks helped to buoy markets on Thursday and the trend continued to the end of the business week. The Stoxx 600 has fallen 7.5 per cent this year and entered a bear market last week. Cold weather on either side of the Atlantic pushed up oil prices aiding the performance of some markets.

Ryanair ended the day down 0.66 per cent at €14.40 after about 1.85 million of its shares changed hands. Dealers suggested two reasons for the dip: the stronger oil price and the possibility it will give a cautious outlook for its last quarter when it publishes results next week.

Another heavyweight, packaging group, Smurfit Kappa, gained 2.2 per cent to close at €21.87 on trades totalling 1.9 million shares. Brokers said overall volumes in the market were “patchy” and noted that some big sell orders took time to clear.

The move helped to push up oil-related stocks, BP and Royal Dutch Shell were notable risers, lifting 10.5p to 352.7p and 69.5p to 1388p respectively. Miners had a more mixed day. Anglo American slumped 8.6 per cent to 226.7 pence, Glencore weakened by 4.5 per cent to 78.6 pence, while Rio Tinto fell 1.1 per cent. Some dealers say Anglo could even drop out of the FTSE 100 index if its shares continue to fall.

Education giant Pearson was one of the few top flight fallers, slipping almost 2 per cent or 14.5p to 757.5p, after it was the biggest riser in the FTSE 100 Index on Thursday. The group said it would axe about 4,000 jobs as part of a group-wide cost-cutting plan.

Among stocks moving on corporate news, Tod’s gained 3.7 per cent after reporting better-than-expected sales for the fourth quarter and full year.

Apple was up 5.3 per cent at $101.42 and gave the biggest boost to the S&P 500 and the Nasdaq. Piper Jaffray’s Gene Munster advised investors to buy into the iPhone maker heading into its quarterly results next week.

Schlumberger was up 6.1 per cent at $65.20 after the world’s biggest oilfield services company reported better-than-expected profit and set a $10 billion buyback programme.

1 Eason acquires rival Dubray Books for undisclosed sum
2 Solar panels: Are they worth the investment?
3 Bank leaked my loan request to family who tried to rip me off
4 Fuel company loses €1.3m challenge over tax bill
5 When the Chemistry no longer works – the closing of a leading Irish ad agency
6 Up to 5,000 engineering jobs expected to be created in 2020
7 Ryanair and Aer Lingus monitor impact of coronavirus on travel to Italy
8 Stock markets tumble into the red for second straight day
9 Longview seeks permission for 753 homes in Cork’s outskirts
10 Can I see my father’s previous wills?
Real news has value SUBSCRIBE