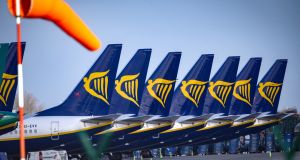 The best performing Irish stock of the day was Ryanair, which finished up 15 per cent.

Global markets rose on Monday, encouraged by a slowdown in coronavirus-related deaths and new cases, though a delay in talks between Saudi Arabia and Russia to cut supply sent oil tumbling again.

Most stocks on Euronext Dublin rebounded on the back of news from mainland Europe that the death toll from the virus slowed across major nations, including France and Italy.

Traders said “markets rallied hard” throughout the day, shortly after they closed. “That being said, it would be too optimistic to say investors are seeing light at the end of the tunnel,” noted one.

The best performing Irish stock was Ryanair, which finished up 15 per cent. The bounce was industry-wide for airlines, which have been among the worst hit by the Covid-19 pandemic.

Traders said the better news coming out of Italy and Spain in relation to the coronavirus buoyed investors in the airlines, and in particular at Ryanair which depends heavily on the Italian and Spanish markets.

Kerry Group was unchanged as it struggles with restaurants still being closed, while house builders saw marked improvements with Cairn Homes and Glenveagh Properties both up 14 per cent.

UK shares surged on Monday, led by battered travel stocks, insurers and housebuilders, as investors welcomed signs of slowing increases in coronavirus-related deaths in the worst-affected parts of western Europe.

The internationally focused FTSE 100 closed up 3.1 per cent, still underperforming its European peers as exporters were pressured by a recovering pound.

Aero-engine maker Rolls-Royce surged 18 per cent after it secured an additional revolving credit facility, but said it was scrapping its targets and final dividend. Insurer Legal & General Group soared 16.7 per cent.

However, Daily Mirror-owner Reach dropped 9.9 per cent after it suspended its dividend and said it would furlough staff, cut wages and management pay to weather the health crisis.

German shares jumped 5.8 per cent on Monday to lead a strong bounce in European stocks.

While all major sectors were well in the black, the travel and leisure sector – worst hit by the lockdowns – rallied 8.2 per cent breaking a three-day losing streak, while the German-focused auto sector led gains with its near 9.5 per cent jump.

Frankfurt’s DAX marked its best session in two weeks, while all other major European bourses closed up between 2.3 per cent and 4.9 per cent. The pan-European benchmark STOXX 600 index also posted its biggest one-day gain in two weeks.

The S&P 500 was on track to recoup about $1 trillion in market value in a frantic rally after New York, the biggest US coronavirus hot spot, reported a fall in daily deaths, raising hopes that the pandemic could level-off soon.

All three main stock indexes jumped more than 4 per cent, with gains led by the defensive utilities sector. Consumer staples and real estate stocks – also considered safe bets during times of volatility – rose between 2.7 per cent and 6.1 per cent.

The S&P 500 banking index jumped 5.2 per cent and was set for its best day in more than a week. Bank of America, Citigroup, Wells Fargo and JP Morgan advanced between 4 per cent and 6.4 per cent, tracking Treasury yields.

The Dow Jones Industrial Average was up 5.51 per cent, while the Nasdaq Composite was up 5.32 per cent. (Additional reporting: Agencies)