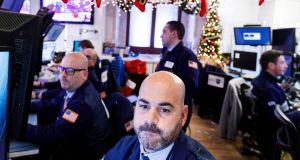 Traders on the floor of the New York Stock Exchange. Photograph: Justin Lane/EPA

Worries about US bond markets signalling an impending recession, and a still rumbling trade war between the world’s top two economies, saw European shares sink further on Wednesday after a 3 per cent drop on Wall Street the previous day.

The pan-European Stoxx 600 ended down 1.2 per cent at its lowest level since November 23rd.

The euro-zone stock index and Germany’s Dax also fell 1.2 per cent. US stock markets were shut on Wednesday for a day of mourning in honour of former president George HW Bush, who died last week. Cyclical sectors such as construction and miners posted the biggest falls, down 2.2 and 1.8 per cent respectively, as investors dumped stocks highly sensitive to economic growth.

The Iseq followed its European counterparts down, falling 0.6 per cent at 5,665. The souring of sentiment in the US hit Kingspan the hardest. The insulation maker, which has a growing business in the US, fell nearly 5 per cent to €37.14. Building materials group CRH and packaging group Smurfit Kappa were also knocked back, closing down 2.3 per cent and 3.3 per cent respectively. Green Reit was marginally up, but rivals Iris Reit and Hibernia Reit traded down slightly as the UK market mulled the direction of the Brexit parliamentary debate.

It was a mixed bag for the State’s two main financials, with Bank of Ireland trading up 1.7 per cent at €5.43 and AIB falling slightly to €3.69. Ryanair shares were strong, closing the session up 3.5 per cent at €11.80. The impact of Brexit on the aviation sector is far from clear with just four months to go to the UK’s planned exit in March.

Blue-chip London stocks were feeling the knock-on effects of a gloomy mood in the US on Wednesday, with the Wall Street hangover sending European markets into the red. The Ftse 100 index closed 100.92 points lower, a decline of 1.44 per cent, at 6,921.84.

On the London market, Shire was 140.5p higher at 4,690.5p after Japanese firm Takeda won shareholder approval for its £46 billion acquisition of the company. Ted Baker shares recovered slightly after two days of declines as the company deals with allegations of harassment levelled at its founder, Ray Kelvin. Shares were 47p, or 3.31 per cent, higher at 1,467p.

Chipmakers AMS, STMicroelectronics and Infineon fell 2.3 per cent to 6.1 per cent following a sharp drop in chip stocks on Wall Street overnight. German carmakers slightly outperformed the Dax as investors digested what seemed a relatively positive outcome from a meeting of auto executives at the White House.

US president Donald Trump pressed carmakers to increase investments in the United States, something the executives said they planned to do but wouldn’t be able to if the administration went ahead with threatened tariffs. White House economic adviser Larry Kudlow, among those in the meeting, said he did not think that car tariffs were imminent. Daimler and BMW and Volkswagen all fell less than 0.9 per cent.

Shares in valve manufacturers Rotork and Weir , which supply the oil industry, tumbled after US energy services firm Schlumberger warned on Tuesday that a drop in fracking activity would hit its North American revenues. Swedish pharma firm Elekta was a rare gainer, up 3.5 per cent after it won Food and Drug Administration clearance for its Unity radiation therapy, clearing it for commercial sales and clinical use in the United States. M&A news was also a driver.

US financial markets are closed Wednesday for a national day of mourning to honour former president George Bush. US Federal Reserve chairman Jerome Powell’s testimony to Congress, scheduled for Wednesday, was also cancelled. – Additional reporting by Bloomberg and Reuters