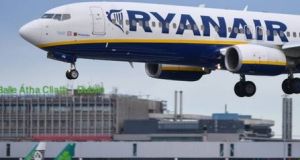 The falling oil price benefitted fuel-dependent travel companies, with Ryanair up 0.52% to €11.65

US stocks gained as investors focused on the outlook for trade ahead of a meeting between the US and Chinese presidents. US treasuries edged higher and oil fell.

In Europe, Frankfurt’s export-heavy DAX stock index and Britain’s domestic-focused FTSE 250 both faced a fourth consecutive month of declines. The German index saw its worst run since late 2008, weighed by Deutsche Bank shares falling to an all-time low as police searched its headquarters for a second day in a money laundering scandal linked to the Panama Papers.

Providence Resources fell more than 7 per cent to close at 14 cent. Chief executive Tony O’Reilly Jr said it would submit a new application for permission to conduct a survey at its Barryroe prospect in the Celtic Sea after An Taisce launched a legal challenge against the permission it previously sought.

The falling oil price benefitted fuel-dependent travel companies, with Ryanair up 0.52 per cent to €11.65, and Irish Ferries owner Irish Continental Group up 0.85 per cent to €4.77.

Kenmare Resources was up 4.5 per cent to €2.30 on hopes that China and the US may ease their trade dispute. China is a major importer of minerals.

The FTSE 100 was down 0.8 per cent, underperforming its euro-zone peers due in part to its heavy weighting in mining stocks. The midcap FTSE 250 was down 0.7 per cent. Stocks ended the day on their lowest levels of the session and the index lost 2 per cent on the month amid lingering woes about Brexit, trade disputes and the slowing global economy.

Mining stocks were down 1.8 per cent after China reported its weakest factory growth in more than two years and as investors fretted about the outcome of a meeting between US president Donald Trump and China’s Xi Jinping that may decide the fate of their prolonged trade dispute on Saturday.

Among other companies exposed to the economic climate in the world’s second largest economy, Burberry dropped 2.8 per cent along with other European luxury goods makers. China’s burgeoning middle class is an increasingly important market for high-end retailers.

Kier Group lost about a third of its market cap after announcing it will sell shares to raise about £264 million.

Tomas Cook issued a latest profit warning this week as the travel agent struggles with stiff competition from online rivals and low-cost airlines. TUI was down 6.6 per cent.

The pan-European STOXX 600 ended the session down 0.3 per cent and on a 1.2 per cent loss over the month after a disappointing earnings season. Germany’s DAX, the most sensitive to China due to its big exporters, fell 0.4 per cent.

Among the biggest drags on the STOXX were luxury goods conglomerates Kering and LVMH, down 1.2 per cent and 1.5 per cent respectively. Luxury stocks have been especially sensitive to slowing growth in China.

Zalando fell 4.4 per cent after Kepler Cheuvreux cut its price target on the stock, saying it has become more sceptical about the long-term potential for margins at the online retailer.

Energy stocks fell 0.51 per cent, leading declines among the major S&P sectors as oil prices dropped. However, airlines stocks got a boost from lower oil prices, with the Dow Jones Airlines index rising 1.8 per cent.

Marriott International dropped 5.7 per cent after the company said a guest reservation database of its Starwood Hotel brand was breached, potentially exposing information on about 500 million guests.