Maserati plans a second, smaller SUV as it looks to grow sales

Italian car maker wants to grow its global vehicle sales to 80,000 a year 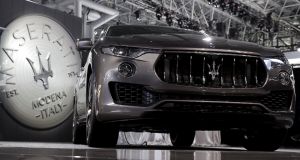 Maserati is taking a play from rival Porsche’s book, planning a second, smaller SUV as it looks to grow its global vehicle sales to as many as 80,000 a year.

Marchionne has said Maserati can eventually generate €1 billion in earnings before interest and taxes on 70,000-80,000 vehicle sales. “We should be able to get there” with a second SUV, he said Tuesday, adding that it will probably happen by 2020. Globally, Maserati sold about 36,000 vehicles through the first three quarters this year, up more than 50 per cent from the same period a year earlier.

Volkswagen AG’s Porsche has already been building out its lineup beyond traditional luxury sports cars, adding the Macan as a smaller alternative to the Cayenne SUV, as drivers in major markets increasingly demand SUVs and crossovers.