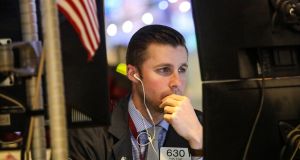 A trader working on the floor of the New York Stock Exchange on December 26th. Photograph: REUTERS/Jeenah Moon

Wall Street was marked by volatile trading on Wednesday as investors returned following a turbulent run-up to Christmas that had helped wipe more than $3 trillion (€2.6 trillion) in value from the S&P 500 index this month.

With major markets shut in Europe, attention was on a US market that has been the epicentre of the turmoil in global equities in December.

In a mixed session, the benchmark index climbed as much as 1.5 per cent within minutes of the open and then relinquished that gain by mid-morning before backtracking again to trade up about 2.4 per cent early in the New York afternoon.

The unease among investors had left US investors nursing their worst ever Christmas Eve losses, as concerns over slower global growth and political uncertainty in Washington dominated the final trading days of the year.

“There is definitely a growing concern about the future of the economy, that the Fed tightened too quickly and that DC is a mess and isn’t going to get anything done,” said Peter Tchir, chief macro strategist at Academy Securities. “Until there is some more clarity on what DC is going to look like, markets will struggle.”

Investors have pulled money from investment funds focused on US equities in what has been an unusually bruising December for investors, exacerbated in recent days by the partial shutdown of the US government, reports that President Donald Trump had considered trying to dismiss Federal Reserve chairman Jay Powell and an effort by Treasury secretary Steven Mnuchin to calm investors nerves that appeared to backfire.

“Current unknowns, from Fed policy to trade wars and now White House turmoil, are proving too heavy a weight to allow US equity markets to find their footing,” said Nicholas Colas, co-founder of DataTrek.

Asian equities had tumbled on Tuesday, but Japanese markets clawed back some of those losses on Wednesday when the Topix closed up 1.1 per cent.

This month’s steep declines in US stocks saw the S&P 500 on Monday briefly fall 20 per cent from its previous intraday peak in September. This tumble in the S&P 500 remains just shy of a bear market, typically defined as a 20 per cent drop from a previous closing high. The widely tracked index has lost more than $5tn in value from its September record, according to Howard Silverblatt, a senior index analyst at S&P Global.

Although global equities had been under pressure for much of December, the sell-off intensified after the Fed raised interest rates for a fourth time this year and signalled that it would continue to tighten monetary policy by trimming its multi-trillion-dollar balance sheet. Some investors are concerned that the Fed’s approach will leave the US economy more vulnerable to the weaker pace of growth that has taken hold elsewhere.

Michael Hasenstab, chief investment officer for Franklin Templeton’s global bond funds, warned that investors should steel themselves for more market tantrums in 2019, as tighter US monetary policy once again hits bond prices and further undercuts support for financial markets. “There is a lot of entrenched interest rate risk in all financial markets right now,” he said.

In a Christmas Day media briefing at the Oval Office, Mr Trump accused the Fed of raising rates too quickly. When Mr Trump was asked whether he had confidence in Mr Mnuchin, the president replied: “Yes I do. Very talented guy, very smart person.” Questioned about Mr Powell, Mr Trump said: “Well, we’ll see. But they [THE FED]are raising interest rates too fast, that’s my opinion.”

The sharp souring in sentiment towards equities has stirred a rally in haven assets. The yield on the benchmark 10-year Treasury has fallen from 3.24 per cent in early November to 2.77 per cent on Wednesday. At the same time, the gold price has jumped more than 5 per cent since the middle of last month.

Oil markets also staged a rally on Wednesday morning, with Brent Crude rising 6.1 per cent to $53.57, helping to recover much of its 6.2 per cent decline on Monday.

Although Wall Street has been at the heart of December’s turbulence, other major markets have also been affected. China’s benchmark CSI 300 closed down 0.5 per cent on Wednesday, leaving it 26 per cent lower this year. In South Korea the Kospi shed 1.3 per cent. Despite Wednesday’s recovery, Japan’s Topix has fallen more than 20 per cent since the start of 2018.

Barring a stunning rally in Tokyo, Japanese equities are poised to end the year in bear market territory.