Effectiveness of method to dampen extreme volatility to be assessed 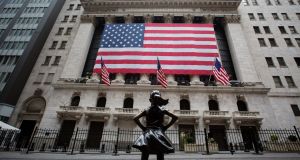 The New York Stock Exchange is planning to review the effectiveness of market-wide systems designed to dampen extreme volatility after circuit-breakers were tripped several times last month during a stampede from risky assets.

In mid-March US markets saw a series of 15-minute halts to trading following big drops in the S&P 500 index, as investors spooked by the spread of coronavirus scrambled to dump positions.

It was the first time that such protections had been activated since the system was revamped in 2012, and most were tripped moments after the opening bell. Any changes to the system would have to be agreed with rival exchange groups such as Nasdaq and CBOE Global Markets.

Under the existing system, the S&P 500 can drop as much as 7 per cent from the previous day’s close, before a halt is triggered. Further circuit-breakers kick in at 13 per cent and 20 per cent falls, to guard against sharp declines that “may exhaust market liquidity”, according to the NYSE.

Stacey Cunningham, president of the exchange, told the Financial Times one area of focus would be the settings for circuit breakers for futures on the index, which can move by a maximum of 5 per cent in either direction. That discrepancy between permissible moves in the futures and the cash market, she said, could potentially exacerbate pressure on stocks in the opening minutes.

“Having the trigger right after the open, when there wasn’t new news in those few seconds to minutes, is certainly something we’re going to explore, to see if we can further improve the way the market-wide circuit breakers work,” she said.

Ms Cunningham noted the exchange-traded fund linked to the S&P 500, typically one of the most traded daily securities in US markets, had continued to trade when the out-of-hours futures markets hit their limits. The security, known as the SPDR, had traded much lower.

“It turned out that the ETF was a very good indicator of the overall value of the index. It became a price discovery mechanism on its own,” she said.

The coronavirus crisis forced the NYSE to close its famous trading floor at 11 Wall Street, for the first time in its 228-year history. The company also runs four electronic stock exchanges. Brett Redfearn, director of trading and markets at the SEC, the equity markets regulator, told the FT the shutdown was “a unique experiment”, and one that would be tested by a big initial public offering.

Ms Cunningham said the overall market quality had been good, although “not as good as with people involved”.

“Having the floor there and having people dampen that volatility was a service we wanted to continue to provide,” she said.

She also defended the decision not to close the floor earlier. Some of its customers had begun trading remotely, and the Chicago futures exchanges CME Group and CBOE had closed their trading pits the week before.

For Ms Cunningham, who started on the NYSE floor 25 years ago, the decision was “not one we took lightly”. Many floor traders were patriotic and had wanted it to stay open, she added.

“It’s also the symbolic nature of the trading floor that’s important. Having the floor open for business and running is an important message,” she said.

In the weeks beforehand, NYSE had sent hundreds of employees home and restricted guests. Everyone entering the building was screened by a medical professional.

However, the rapid rise in cases in New York made it impossible to carry on, she said. “The floor will definitely open again. We’re going to provide full service once we can do so safely.”

Days after the closure of the floor Peter Tuchman, a veteran figure dubbed “the most photographed trader on Wall Street”, confirmed he had coronavirus. He has since recovered, telling Ms Cunningham on Twitter that he would “hightail it back to work the minute you give the green light”. – Copyright The Financial Times Limited 2020