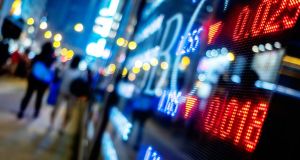 Dublin’s Iseq index and wider European equities markets fell on Friday morning as investors continued to seek the safety of the US dollar and government bonds, pushing US Treasury yields near their lowest in three weeks.

Oil prices shed some of their massive gains on Friday taking stocks in Asia lower, as doubts grew over an oil price deal between Saudi Arabia and Russia that US president Donald Trump said he had brokered.

Analysts said it was hard to see a deal to call off the Saudi-Russian price war going ahead without the participation of other major producers, or whether any such deal could come quickly enough and be large enough to balance the market in the face of a deep economic recession caused by the coronavirus pandemic.

Banking stocks were lower in Dublin in early trading, with AIB down 2.9 per cent and Bank of Ireland off 2.7 per cent.

In wider European stocks, Zurich Insurance Group, AXA, Munich Re and Prudential fell between 1.9 per cent and 4.2 per cent after the European Union’s insurance regulator asked insurers and reinsurers to temporarily suspend dividends and share buybacks.

H&M, the world’s second-biggest clothing retailer, reported a 46 per cent plunge in March sales and said it expected a loss in its fiscal second quarter. However, the company’s shares, which have lost 40 per cent of their value since end January, jumped 5 per cent as it said was taking steps to strengthen its liquidity buffer and cut operating expenses.

Meanwhile, borrowing costs in the euro zone were steady to a touch lower on Friday, as news that global coronavirus cases have now surpassed 1 million weighed on investor sentiment.

Bond yields across the bloc, however, were set to end the week higher, reflecting some upward pressure as the likes of France, Spain and Portugal all stepped into the market with new supply this week as the outbreak sparks a surge in fiscal spending and new issuance.

Ten-year bond yields in Italy, France and Spain were all set to end the week 10 basis points or more higher.

Benchmark German Bund yields have risen around 4 basis points this week. In early Friday trade, most 10-year bond yields in the bloc were 1-2 basis points lower on the day amid still dire news on the coronavirus.