Iseq all-share index closed down 0.11 per cent with banks and housebuilders dragging 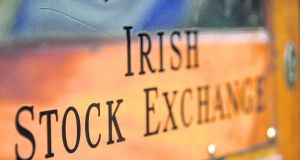 European stocks closed lower on Friday as losses on Wall Street following a surge in US coronavirus cases added to worries over the pace of the global economic recovery.

The Iseq All-Share index closed marginally lower on Friday, ending down 0.11 per cent as stocks most exposed to the outcome of government formation dragged.

While there was little in the way of market news on the day, Ryanair again came under pressure after its rival EasyJet completed a share placing earlier in the week. The Irish budget airline closed down by 2.18 per cent at €10.32.

London’s blue-chip FTSE 100 closed up 0.2 per cent but a defensive rally showed evidence of investor worry.

British American Tobacco, Reckit Benckiser and Unilever were among those getting the biggest boosts. The pound, meanwhile, slid on doubts about Britain’s trade pact with the European Union.

Britain’s biggest retailer Tesco rose 1.9 per cent after it reported an 8.7 per cent increase in underlying UK sales in its first quarter, boosted by the coronavirus lockdown.

Over the week, the FTSE 100 fell 3.2 per cent. The index has recovered more than 35 per cent since March lows but is still down about 18 per cent this year.

The pan-European Stoxx 600 index fell 0.4 per cent after hovering in positive territory earlier in the session. Banks were the biggest decliners, down 2.2 per cent.

European Central Bank president Christine Lagarde said the euro zone is “probably past” the worst of the economic crisis caused by the pandemic, but the recovery will be uneven. However, the Stoxx 600 lost some steam heading into the close as investors focused on a record one-day rise in US Covid-19 cases.

The Stoxx 600 recorded a near 2 per cent decline for the week, with travel and leisure stocks lagging the most. Air France-KLM closed 3.4 per cent lower after rising earlier on news the Dutch government will provide €3.4 billion in support to its Dutch arm.

AMS rose 1.5 per cent after the Austria-based semiconductor company rejected media allegations of market manipulation during its takeover of Osram.

Sweden’s H&M fell 5.5 per cent after the world’s second-biggest fashion retailer saw a slightly deeper than expected loss in the second quarter.

Wall Street’s major indices dropped on Friday as the United States set a new record for a one-day increase in coronavirus cases and bank stocks tumbled after the Federal Reserve decided to cap shareholder payouts.

Nike dropped 5.8 per cent as the footwear maker posted reported a surprise quarterly loss hurt by store closures due to the pandemic.

Facebook shed 6.4 per cent after Verizon Communications joined an advertising boycott that called out the social media giant for not doing enough to stop hate speech on its platforms.

Gap surged 31.4 per cent after it entered into a 10-year deal with rapper and fashion designer Kanye West to create a Yeezy line of clothing. – Additional reporting: Reuters