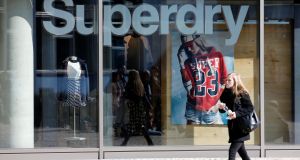 European shares closed lower for a fourth straight session on Wednesday as concerns about trade tensions and a weak global economy highlighted by US Federal Reserve chair Jay Powell overshadowed short-lived optimism of an interest rate cut later in the month.

Mr Powell said trade uncertainties and concerns about the global economy continue to weigh on the US economic outlook and the US central bank stands ready to “act as appropriate” to sustain a decade-long expansion. Markets jumped on the comments as sufficiently dovish pushing the S&P 500 above the 3,000 mark for the first time and sending most European indices into positive territory.

The Iseq fell marginally to 6,235 in keeping with other bourses in Europe. Property reits, Green, Hibernia and Ires, fell by 1 per cent, 0.6 per cent and 2 per cent respectively after the latest official property price register showed a further slowdown in headline inflation to 2.8 per cent in May, a six-year low. “The latest Irish housing data points to some stabilisation in house price inflation, but an ongoing lacklustre trend in transactions for new homes,” Goodbody analyst Dermot O’Leary said. Elsewhere Bank of Ireland followed the weaker trend in Europe for financials, falling 0.4 per cent to €4.65. Rising oil prices sent Ryanair shares down 2 per cent to €10.07.

Packaging giant Smurfit Kappa enjoyed a 2 per cent bounce to €28.10 amid more positive sentiment for the sector. Struggling Swiss-Irish food group Aryzta posted a 1.3 per cent rise to €0.96.

The FTSE 100 was subdued as investor sentiment in the UK failed to match positivity in the US, where the Dow Jones jumped after the Federal Reserve chief suggested a rate cut could be on the cards. London’s top flight closed down by 5.78 points at 7,530 at the close of trading. Superdry saw shares decline after its new management team pledged to return to profitable growth, as it posted a significant loss. The group reported a loss before tax of £85.4 million for the year to April 27th, compared with a £65.3 million profit this time last year. The clothing brand saw shares close down 8.4p at 439p.

Shares in JD Wetherspoon lifted after the pub chain posted a solid rise in sales, bucking the trend in a pub market struggling to beat last year’s World Cup summer. The value pub chain said like-for-like sales in the 10 weeks to July 7th were up 6.9 per cent, consistent with growth in the year to date of 6.7 per cent. It saw shares rise by 36p to 1,444p at the close of trading.

Barratt Developments upped its full-year earnings outlook after it said completions have surged to an 11-year high, edging its share price higher. Britain’s biggest housebuilder said it delivered 17,111 homes, excluding joint ventures, in the year to June 30th – up 2.6 per cent on the previous year. Barratt’s shares closed up 7.8p at 584.2p. Dunelm saw shares slip into the red despite posting solid fourth quarter sales figures. Shares in the company fell by 17p to 870p at the end of trading.

Milan’s bank-heavy FTMIB index outperformed as robust industrial data out of France and Italy earlier in the day helped push euro zone bond yields higher. A surge in crude prices and gains for metals helped the oil, gas and basic resources sectors gain nearly 0.6 per cent each. Chip stocks led by AMS also fared better after the sector reported its best monthly sales in June since December. Planemaker Airbus rose 1.5 per cent after confirming deliveries rose by 28 per cent in the first-half of the year, putting it ahead of Boeing for the first time in eight years.

The benchmark S&P 500 briefly crossed the 3,000 points mark for the first time on Wednesday, as bets for a sharp interest rate cut later this month were boosted by Mr Powell’s dovish comments. Gains of near 1 per cent each in Amazon, Apple and Facebook also lifted the Nasdaq and the S&P. “Investors already got what they wanted when Powell’s statement was released. They got news that the Fed was ready to cut [interest rates] in July,” said Michael Antonelli, market strategist at Robert Baird in Milwaukee. “What the bulls are really hoping for is that this is just a growth scare.

Shares of rate-sensitive banks retreated 0.89 per cent after Mr Powell’s comments. The financial sector shed 0.3 per cent. Generic drugmaker Mylan’s shares fell 4 per cent after rival Amneal Pharmaceuticals cut its 2019 core earnings forecast. Advancing issues outnumbered decliners by a 1.76-to-1 ratio on the NYSE and by a 1.04-to-1 ratio on the Nasdaq. – Additional reporting Reuters

1 How can I view my dead brother’s will if I’m not the executor?
2 Investors pile into Irish property as turnover in build-to-rent sector reaches €2.54bn
3 Provisional liquidator appointed to Dublin engineering firm
4 Travel costs for IDA chief topped €45,137 last year
5 Facebook faces tax court trial in US over Irish offshore deal
6 Bursting of Tesla bubble a case of ‘not if, but when’
7 Aqua Dome in Tralee could close over insurance claims, directors warn
8 Legal row erupts over €85m contract
9 Kerry’s Chinese sales set for 30% hit from coronavirus
10 Mount Charles wins €10m catering contract at Maynooth University
Real news has value SUBSCRIBE