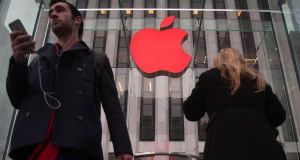 In New York, Apple’s 1.2 per cent drop weighed heavily on the three main indexes and the shares were on course to end five days of gains. Photograph: Carlo Allegri/Reuters

US equities swung between gains and losses after the S&P 500 reached an all-time high for a third consecutive trading session.

The Iseq index was virtually flat on thin volumes, rising just 0.13 per cent by the end of the day after slipping back following lunchtime.

The Swiss-Irish baked goods producer Aryzta finished the session down more than 5.2 per cent to 54 cents per share. A report from investor advisory group ISS recommended Aryzta shareholders back the company’s proposed replacement for outgoing chairman Gary McGann, but accused it of doing too little to tackle its problems. Dissident shareholders want to oust the board.

Aviation retail software group Datalex fell by 2.2 per cent to 52.6 cents per share, as companies associated with the travel industry struggle to find traction among investors during the pandemic.

Iseq heavyweight CRH fell 3.3 per cent to €32.50, even though analysts highlighted that the building materials group has upgraded some estimates.

The export-laden FTSE 100 index closed lower, weighed down by miners and a stronger pound, while an unexpected drop in retail sales kept risk sentiment at bay. The blue-chip London index fell 1.1 per cent and the mid-cap FTSE 250 dropped 0.6 per cent.

The FTSE 100 is still on course for its best month since April 2018 even as concerns linger about a choppy economic recovery after a record contraction in the second quarter.

Retailer DFS Furniture jumped 10.7 per cent after saying its performance over the last six weeks was significantly above its initial expectations.

AstraZeneca rose 0.2 per cent after the British drugmaker said it had started testing an antibody-based cocktail for the prevention and treatment of Covid-19.

Aveva Group rose 7.2 per cent after announcing a deal to buy OSIsoft, a privately-held maker of industrial software, for an enterprise value of $5 billion.

The pan-European Stoxx 600 index closed down 0.3 per cent as Monday’s gains ran out of steam, putting the benchmark comfortably within its trading range since mid-May.

The Stoxx 600 is still some 15 per cent off a pre-pandemic record high, as a recovery from March lows stalled in the face of resurgent Covid-19 cases and sluggish economic growth. Data last week had shown business activity faltering in the region.

The trade-sensitive German DAX closed flat after data showed Europe’s largest economy contracted by a record 9.7 per cent in the second quarter, but marked a minor upward revision from an earlier estimate of minus 10.1 per cent.

LVMH gained 0.9 per cent after a source told Reuters the French luxury goods giant and US jewellery chain Tiffany will give themselves another three months to complete their $16.2 billion tie-up.

SAS jumped 10.1 per cent after the airline said it was expecting to complete a 14 billion Swedish crown recapitalisation plan to counter the effects of the pandemic by November.

Oil rose as traders eyed tropical storm Laura, which is expected to strengthen into a hurricane before making landfall later this week. US gasoline futures rose to the highest level since March on concern over possible fuel shortages.

Salesforce. com, Amgen and Honeywell International climbed between 3.6 per cent and 4.6 per cent on news they would join the blue-chip Dow Jones Industrial Average index on August 31st.

Cloud computing heavyweight Salesforce.com was expected to report second-quarter results after markets closed. The three companies will replace Exxon Mobil Corp, Pfizer and Raytheon Technologies, which were down between 1.9 per cent and 3 per cent.

Apple’s 1.2 per cent drop weighed heavily on the three main indexes and the shares were on course to end five days of gains. – Additional reporting: Reuters/Bloomberg