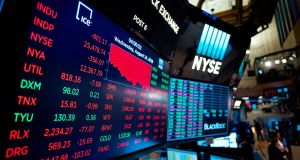 European stocks edged higher amid light trading on Monday after fluctuating throughout the session, as investors focused on the reintroduction of travel and other restrictions in some countries, as well as simmering US-China trade tensions.

Oil climbed alongside US equities as optimism that an economic recovery may be on the horizon lifted hopes that improving fuel demand may follow.

The Iseq fell 0.5 per cent, as a gain for index heavyweight CRH was more than cancelled out by declines for the banks and a 7.6 per cent plummet for Ryanair.

The airline, which closed at €10.84, said it was cancelling 20 per cent of flights in September and October as the resurgence of Covid-19 cases across Europe took its toll on bookings.

The FTSE 100 outperformed European markets, with the blue-chip index rising 0.6 per cent as it was lifted by gains for mining stocks such as Anglo-American, which added 2.8 per cent. The FTSE 250 rose 0.2 per cent.

Aer Lingus owner International Consolidated Airlines Group (IAG) was a key faller, dropping 5.3 per cent amid poor sentiment for airlines. EasyJet fell 4.6 per cent as the budget airline said it would push ahead with its plans to close its bases in Stansted, Southend and Newcastle as part of a cost-cutting exercise.

Cranswick soared almost 25 per cent after the meat supplier raised its outlook as increased home cooking buoyed sales. British American Tobacco was also among the climbers, adding 1.9 per cent.

The benchmark European Stoxx 600 index added 0.3 per cent, with the German Dax and the French Cac 40 both finishing up less than 0.2 per cent. Spanish and Italian stocks were in the red as the countries reintroduced restrictions to curb the spread of Covid-19.

Holiday company TUI was among the fallers, dropping 5.4 per cent in Frankfurt, as travel stocks across Europe declined and the world’s largest tourism operator suspended trips to Spain from both the UK and Germany.

Airbus fell 0.7 per cent in Paris. The Toulouse-based aircraft manufacturer is set to name a former General Electric executive, Wouter van Wersch, as its sales chief in Europe, Bloomberg reported.

Wall Street stocks climbed toward an all-time high in early trading as a rally in technology companies tempered a slide in banks. Google owner Alphabet added 1.1 per cent, while Amazon was up 0.9 per cent and Microsoft was up 0.7 per cent. However, Facebook and Apple lost ground.

The Nasdaq 100 outperformed as a jump in Tesla and Nvidia, as well as strong results from online retailer JD.com, powered gains in tech shares. Tesla surged more than 8 per cent, while computer game company Nvidia, which reports earnings later this week, was trading 7 per cent higher.

The Dow Jones opened in the red, weighed down by aircraft manufacturer Boeing, which declined 3 per cent in early trading. – Additional reporting: Bloomberg/Reuters