Bank of Ireland, one of Iseq’s strongest performers, trades up in Dublin ahead of AIB flotation 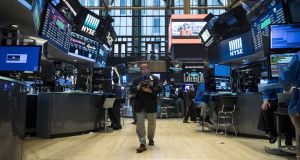 Traders on Wall Street: health stocks got a boost on Thursday after Republicans unveiled a Bill to repeal Obamacare and the energy sector took a breather with oil prices edging up from multi-month lows

A rise in European health stocks helped pull European shares out of negative territory on Thursday, pegged back by the slide in the energy sector on the back of weakened oil prices. The pan- European STOXX 600 index ended the session flat following two days of straight losses, while the blue chips were also flat. Healthcare was the top-gaining sector, up 2 per cent and briefly touching its highest level since December 2015, with Switzerland’s Novartis in the driving seat.

The Iseq ended the day a fraction lower at 7,088.31 underperforming its European peers. Bank of Ireland was one of the strongest performers, increasing 2 per cent to 23.5 cents. With more than 200 million shares traded, the stock appears to have been buoyed by positive sentiment towards the Irish banking sector ahead of the Government’s AIB flotation today. However the feel good factor did not extend to Permanent TSB, which traded flat at €2.88.

Iseq heavyweight Ryanair traded up 0.6 per cent at €18.73, which was roughly in line with the sector. Insulation maker Kingspan closed 2 per cent up at €30.75 as negative sentiment against the sector in the wake of the London fire tragedy waned.

London’s premier index ended the day in the red, as commodity stocks failed to recover losses despite a oil price bounce-back. The FTSE 100 index closed lower by 0.1 per cent or 8.5 points at 7,439.29, with oil majors and mining stocks facing pressure amid continued concerns about the global energy supply glut. Both BP and Royal Dutch Shell’s “B” shares ending the day flat at 456.75p and 2,097.5p, respectively.

Elsewhere, GlaxoSmithKline shares jumped 39p to 1,722p after the drugs giant was handed $235 million in a court case linked to the patent for blood pressure medicine Coreg. Standard Life edged lower by 2.5p to 389.7p and Aberdeen Asset Management was down 0.3p to 293.6p despite the competition’s watchdog waving through their £11 billion mega merger, deeming an in-depth investigation unnecessary.

Across Europe, the French Cac 40 and Germany’s Dax both ended the day up 0.15 per cent. Switzerland’s Novartis marched 5 per cent higher following a positive study result for its canakinumab medicine, which cuts risks for heart attack survivors. “Expectations around this catalyst have been low and as a result we have previously highlighted success could drive 3 per cent to 5 per cent upside to mid-term EPS and valuations,” analysts at Jefferies said in note.

Wall Street was higher in late morning trading on Thursday as health stocks got a boost after Republicans unveiled a Bill to repeal Obamacare and the energy sector took a breather with oil prices edging up from multi-month lows. The S&P healthcare index rose 1.08 per cent to hit a record high as investors cheered the bill, which is aimed at curbing Medicaid funding and reshaping subsidies to low-income people for private insurance.

United Health, Johnson and Johnson and Gilead rose between 1 per cent and 3.6 per cent, and were among the biggest boosts on the three major indexes. Among other stocks, Accenture was off 5.7 per cent after the consulting and outsourcing services provider trimmed its annual revenue forecast. Oracle was up 9.5 percent as the business software maker forecast an upbeat current-quarter profit, prompting brokerages to raise price targets.