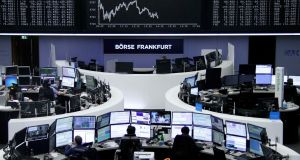 The euro zone’s blue-chip Euro STOXX 50 index weakened by 0.3 per cent. The Stoxx Europe 600 Index slid 0.5 percent, falling for the first time in six days. Germany’s DAX and the Cac 40 in France were both slightly lower

A five-day winning streak in European stocks ran out of steam, with Whitbread and Evonik among the biggest decliners after earnings.

CRH was the star performer jumping 3.6 per cent to €24.96 following strong results. The building materials giant saw pre-tax profits jump 36 per cent to €1.03 billion last year with US sales benefitting from a weaker euro.

Total Produce also reported good results yesterday, announcing 2015 pre-tax profit was up 5.6 per cent on 2014. The food distributor’s shares finished up 2.9 per cent at €1.57.

The Total Produce results boosted Fyffes, which closed up 2.5 per cent at €1.36.

Ryanair, which yesterday announced a 28 per cent increase in passenger numbers, fell 1.4 per cent to €13.85. Dalata was also off, falling 2.2 per cent to €4.60. Earlier this week the hotel group said sterling weakness may have a negative impact on the euro performance of its UK hotels.

Whitbread plunged 6.2 per cent, the most since 2008, after sales at Premier Inn and Costa missed projections.

Inmarsat dropped 4.2 per cent after saying it sees uncertainty regarding future net income from LightSquared.

Admiral rallied 9 per cent and CRH’s London ticker added 4.6 per cent after the companies reported profits that beat estimates.

Among other stocks moving on corporate news, Imperial Brands declined 2.2 per cent after Goldman Sachs cut its rating on the shares to a hold from buy. Travis Perkins gained 3 per cent after posting an increase in sales.

The FTSE 100 Index dropped 0.3 per cent after reaching its highest level of the year on March 1.

Evonik slid 6.3 per cent after flagging a decline in 2016 adjusted core earnings.

Major healthcare stocks such as Roche and GlaxoSmithKline also fell after credit rating agency Moody’s cut its outlook on the global pharmaceuticals industry to “stable” from “positive”.

JC Decaux climbed 3.8 per cent after the French advertising company forecast organic revenue growth of about 9 per cent in the first quarter of this year and proposed a 12 per cent hike in its 2015 dividend.

Telecom Italia rallied 5.7 per cent after people familiar with the matter said chief executive Marco Patuano’s position is being reviewed by Vivendi.

The euro zone’s blue-chip Euro STOXX 50 index weakened by 0.3 per cent. The Stoxx Europe 600 Index slid 0.5 percent, falling for the first time in six days. Germany’s DAX and the Cac 40 in France were both slightly lower

Healthcare and tech were the biggest drags as Johnson and Johnson and Merck lost more than 1.2 per cent, while Microsoft dropped 1.8 per cent. Kroger sank 8.9 per cent to weigh on consumer staples after the grocer forecast slower growth this year.