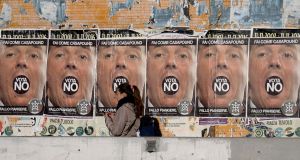 A woman walks past posters from the far-right political movement Casapound calling for a “No” vote in the constitutional referendum in Rome. Photograph: Filippo Monteforte/Getty Images

Traders in Dublin will have their eyes on New Zealand on Sunday night as polls close in Italy’s landmark referendum – or, more precisely, on New Zealand’s currency markets.

“All eyes will be on the Asian open,” according to Garret Grogan, head of trading at Bank of Ireland’s global markets business. “At that point, we should have some exit polls, but we are not expecting any official result until the early hours of Monday.

“At the moment, we are planning to have bodies in early on Monday – how early, will depend on market moves in Asia,” he said.

Sleepless nights have become all-too-familiar for foreign exchange, bond and share dealers over the past six months, following the UK’s shock decision to quit the European Union in June and Donald Trump’s election last month as the next US president, which caught markets off-guard.

This time around, polls indicate that Italian prime minister Matteo Renzi is facing defeat in the referendum which is aimed at streamlining government, speeding up reform of a moribund economy and rekindling growth.

Mounting concern over the outcome of the referendum has contributed to the euro’s slump by as much as 8 per cent to $1.05 since the Brexit vote. It has also led to a rally by sterling in the past seven weeks to 0.84p against the euro from 0.91p previously, delivering something of a reprieve for Irish exporters and retailers in the run-up to the crucial Christmas period.

“My gut feeling is that the currency markets’ reaction to a `No’ vote will be more muted than after Brexit and the US presidential election,” said David Lamb, head of dealing at Fexco’s corporate payments unit. However, he sees the euro ultimately falling to parity against the dollar next year.

The yield, or market interest rate, that investors demand to buy Italy’s key 10-year bonds surged to 2.13 per cent two weeks ago from 1.2 per cent in September. However, pressure on the country’s bonds and its stock market has eased in the past week.

“People have over-egged [the Italian referendum] trade over the past five weeks,” said Donal O’Mahony, global strategist on Davy’s bonds, debt and financial markets team. “You can’t rule out an initial spike [in government bond yields] if there’s a ‘No’ vote, but that would be followed by a period of reassessment.”

“It’s a pointless exercise being in [the office] too early, as European bond markets don’t open until 7am,” said Liam Dorgan, who works in institutional bond sales with Cantor Fitzgerald in Dublin. “After the shock Brexit outcome, we all rushed in for 5am or 5.30am, but there was nothing we could do but discuss the outcome before markets open.”

Dorgan noted that, while there was an initial sell-off in Irish bonds after the UK referendum “as fear and loathing took hold”, yields quickly fell back again as investors focused on the might of the ECB’s €1.7 trillion bond-buying programme.

The near-term impact of the referendum is likely to be felt most severely in the stock market – as Italy’s troubled banks need to raise anywhere between €20- €100 billion, according to analysts, to absorb bad loan losses.

Deutsche Bank economist Marco Stringa and strategist Simon Carter said in a report this week there is a risk markets are underestimating the probability of a severe market reaction even in the event of an expected rejection of the referendum.

“Not only do we believe that PM Renzi will resign, but we also think there is a strong chance that he will disengage from government responsibilities and let others deal with the aftermath,” they said. “Markets could react negatively, with significant stress on the banking sector.”

There’s also the threat of a financial fall-out fuelling political contagion, as the Netherlands, France and Germany face elections next year. This weekend, Austria may elect far-right politician Norbert Hofer as president, albeit a largely ceremonial role.

“There’s definitely a greater emphasis being put by the market on these events, as there’s a clear increase in anti-establishment votes,” said Lamb at Fexco. “If we do see these types of votes increasing, clearly there’s a real chance of pressure on Europe as a whole and possibly even a break-up of the euro zone.”