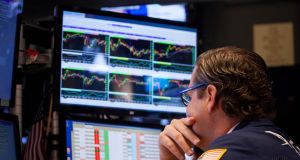 European stocks lost momentum on the final day of their best week in a month amid mixed earnings reports. The Stoxx Europe 600 Index was unchanged at the close on Friday, taking its five-day advance to 1.3 per cent.

Permanent TSB closed up 1.3 per cent at €2.37 amid signals that the new methodology being applied to how the State’s €150 million annual bank levy is calculated could reduce its share of the overall bill.

But Bank of Ireland, which could have to pay a higher portion of the bill, closed down 1 per cent at 18.9 cent.

Deal activity also moved shares: BAT showed choppy moves, with the stock closing 2.9 per cent lower after rising sharply earlier in the day following its offer to buy out the 60 per cent it does not yet own in US cigarette maker Reynolds American in a $47 billion takeover.

The move would create the world’s biggest listed tobacco company with brands including Newport, Lucky Strike and Pall Mall. The deal would mark the return of BAT to the lucrative US market after a 12-year absence.

Reynolds American shares were up 15 per cent after setting a record high earlier in the session.

Top-end retailer Burberry gained 3.1 per cent on a report Coach is considering merging with it.

Basic resources stocks were the top sector gainers, with the UK mining index rising 1.3 per cent following a rally in metals prices. Shares in Anglo American, Rio Tinto and Antofagasta rose 1.2 to 2.8 per cent.

Daimler fell 2.1 per cent as it cut its revenue forecast.

A gauge of Stoxx 600 banks climbed for a fourth day, closing at its highest level since the UK’s secession vote. Lenders have rallied in October, led by those in Italy and Spain, on speculation the ECB may tweak its stimulus in ways that will boost profitability, a key concern in a low-rate environment.

The FTSE MIB Index and the IBEX 35 Index rose more than 3.4 per cent this week, among the best performers in western-European markets.

Miners led gains in the Stoxx 600, closing at a 14-month high following a rise in the dollar. ArcelorMittal and Anglo American added 2.8 per cent or more.

Reynolds American rallied the most in 13 years on the BAT bid.

Time Warner jumped to the highest since 2001 on a report the media giant may agree to a takeover by AT&T as soon as this weekend.

That helped blunt losses spurred by a disappointing outlook from General Electric and the surging dollar. AT&T dropped to a seven-month low.

Additional reporting by Bloomberg and Reuters