US and European stocks slip amid Covid-19 fears 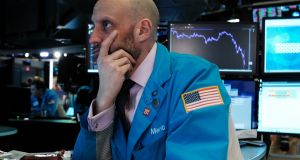 Traders work on the floor of the New York Stock Exchange in New York City.

US stock index futures weakened on Monday, as surging coronavirus cases and a stalemate in Washington over the next fiscal aid bill darkened the economic outlook in the run up to November 3rd presidential elections.

New infections touched record levels in the United States over the weekend with El Paso in Texas asking citizens to stay at home for the next two weeks.

Travel-related stocks that are vulnerable to Covid-19 news including American Airlines and Booking Holdings fell 3 per cent and 2 per cent, respectively, before the bell.

Wall Street’s main indexes finished last week lower as investors closely monitored talks over the next round of fiscal package, while economic data pointed at a stalling recovery.

US House speaker Nancy Pelosi on Sunday said the Trump administration was reviewing the latest proposal for Covid-19 relief over the weekend and that she expected a response on Monday.

Meanwhile, more than 59.1 million Americans have already voted in person or by mail as president Donald Trump and Democratic challenger Joe Biden enter their final full week of campaigning.

It is also one of the busiest weeks of third-quarter earnings season that will see results from mega-cap US tech firms including Apple, Amazon.com, Google-parent Alphabet and Facebook.

Of the 135 companies in the S&P 500 that have reported earnings so far, 83.7 per cent of them have beaten Wall Street expectations, according to Refinitiv data.

London’s FTSE 100 pared early losses on Monday as a surge in banks following a report that the central bank was considering allowing dividend payments again helped offset losses in energy and mining stocks due to weak commodity prices.

Shares in Barclays, HSBC and Lloyds Banking Group rose about 0.5 per cent after The Times newspaper reported the Bank of England (BoE) and commercial banks are “bartering” a deal to allow banks to make shareholder payouts.

Having declined as much as 1.3 per cent in early trading, the FTSE 100 index was down 0.3 per cent, while the domestically-focussed mid-cap FTSE 250 index lost 0.2 per cent as travel and leisure and industrial stocks fell.

European markets were broadly weighed down by fears that a resurgence in coronavirus cases would hamper economic recovery as the government tightens restrictions on activity.

“There’s fear that we get a long winter of restrictions across Europe that hobbles consumer demand and investor confidence,” said Neil Wilson, chief market analyst for Markets.com.

After a stimulus-backed sharp rally from pandemic lows, the FTSE 100 has been trading in tight ranges since June due to Brexit-related uncertainty and concerns over coronavirus curbs.

AstraZeneca rose 1.0 per cent after the drugmaker resumed the US trial of its experimental Covid-19 vaccine and said the vaccine being developed by the University of Oxford produced a similar immune response in both older and younger adults.

Coca-Cola European Partners surged 8.5 per cent after the soft drink bottler made a buyout offer of $6.6 billion for its Australian peer Coca-Cola Amatil. – Reuters