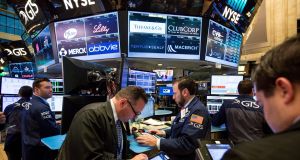 The S&P 500 and the Nasdaq were little changed in early trading on Wednesday as gains in tech stocks offset a weakness in the retail sector, while the Dow was pulled lower by healthcare shares. Photograph: Michael Nagle/Bloomberg

Some of the big names on the exchange booked losses, partly influenced by Theresa May’s hard Brexit speech.

Bank of Ireland shares fell by 2.9 per cent to 23.8 cent. The bank has about 40 per cent of its balance sheet in the UK.

Ryanair closed down 1.7 per cent, Smurfit Kappa finished 3.3 per cent lower and recruiter CPL was 1 per cent off at the close. Permanent TSB announced a reshuffle of its executive management team, finishing 3 per cent lower at €2.62 per cent.

Property Reits Green, Hibernia and IRES closed up by between 0.5 and 2 per cent, while food company Glanbia finished 1.6 per cent ahead at €16.10.

Burberry shares rose 57p to 1,650p as the luxury fashion group hailed an “exceptional” festive performance in the UK as booming tourist trade helped send sales surging by around 40 per cent.

Shares in Pearson — the former owner of the Financial Times — plunged 235p to 573p after the education publisher warned underlying profitability was lower than previously expected and said it was planning to sell its publishing unit Penguin Random House.

Commodity producers advanced 1.4 per cent, the most among industry groups, extending their 2017 gains. Stoxx 600 miners rose for the seventh time in eight days, with ArcelorMittal climbing to a six-week high after Commerzbank AG recommended buying the stock.

Investors are preparing for the European Central Bank’s policy meeting on Thursday, when they’ll look for clues as to when the institution may begin curtailing its stimulus measures.

The S&P 500 and the Nasdaq were little changed in early trading on Wednesday as gains in tech stocks offset a weakness in the retail sector, while the Dow was pulled lower by healthcare shares.

The S&P 500 consumer discretionary sector was the biggest drag on the broader index, falling 0.4 per cent as Target weighed.

The big-box retailer’s shares fell 5.5 per cent – their biggest single-day drop since August – after the brick-and-mortar chain reported dismal results for the holiday season and cut its quarterly earnings forecast.

Bigger rival and Dow component Wal-Mart was off 0.8 per cent.

A frenetic post-election rally in US equities has hit a speed bump in recent weeks as investors wait for Trump to work on his campaign promises.

The markets, which have received little detail on his policy plans, expect to get more insight during his inaugural speech on Friday.

Additional reporting by Bloomberg and Reuters