Iseq down 1.2% with Kingspan, FBD and Bank of Ireland among worst performers 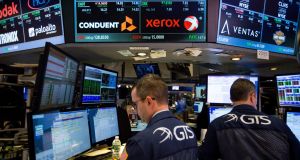 With markets closed in the US for the Martin Luther King Day holiday and investors awaiting a major speech on Tuesday from British prime minister Theresa May on Brexit, it was a quiet trading day.

Investors were largely focused on selling sterling and stocks on Monday, seeking shelter in gold and the Japanese yen as uncertainty over Britain’s departure from the EU and the policies of US president-elect Donald Trump curbed appetite for risky assets.

The pound at one point dropped below $1.20 to a three-decade low, barring its “flash crash” in October, and as much as 2.5 per cent against the Japanese yen. It was 0.6 per cent lower at 87.90p versus the euro and is down nearly 14 per cent against the shared currency since the Brexit vote last June.

With European banks taking a pounding, Bank of Ireland also found itself in the firing line. It ended 2.2 per cent lower at 24.2 cents.

Insulation and building materials group Kingspan was one of the worst performers, down 3 per cent at €26.89 having outperformed over the last week or two. Iseq heavyweight CRH, which like Kingspan is expected to do well under a Trump presidency, was also lower, down 1.6 per cent to €32.57.

Insurer FBD was another stock to slip into negative territory, losing 2 per cent to end at €7.25.

Ryanair was largely unchanged at €14.86, while Kenmare Resources, which on Monday announced a record year for production and shipments, closed up 4.8 per cent to €3.14.

Banks, which had contributed to the FTSE’s rally, pared back on worries over the consequences of a “hard” Brexit for their ability to sell products in the EU. Royal Bank of Scotland was bottom of the FTSE, down 2.8 per cent after Goldman Sachs downgraded it to “neutral” from “buy”. Lloyds Bank and Barclays were also in the red.

Insurance stocks were also among the worst performers, down 1.7 per cent, with Prudential and Standard Life both down more than 2 per cent.

Mining companies were among the biggest risers among the blue chips, with Rio Tinto, Anglo American and Glencore all up between 1.6 per cent to 2.1 per cent. Precious metals miners Randgold Resources and Fresnillo both rose around 1.6 per cent, helped by a firmer gold price.

Among shares active on corporate news, France’s Essilor International surged 12 per cent after the French lensmaker and Italy’s Luxottica agreed a €46 billion merger to create a global powerhouse in the eyewear industry with revenues of more than €15 billion. The Italian maker of Ray-Ban sunglasses rose 8.3 per cent on the news.

German carmakers BMW, Daimler and VW all fell after Trump warned he would impose a 35 per cent border tax on vehicles imported to the US market. VW was down 2.2 per cent, while BMW and Daimler’s shares ended 1.5 per cent lower.