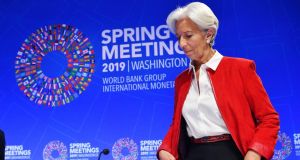 Christine Lagarde was nominated on Tuesday to take over at the helm of the European Central Bank. Photograph: Getty Images

The Iseq outperformed most European peers while Britain’s main index rallied to a 10-month high. The S&P 500, meanwhile, hit another fresh record high on bets of an interest rate cut.

The Iseq overall index closed 1.85 per cent up on Wednesday while the smaller Iseq 20 rose 2.02 per cent with all but two stocks in the green.

Flutter Entertainment, the owner of Paddy Power and Betfair, closed the day up 11.55 per cent at €76.32 on the back of speculation in the Financial Times that the company was subject to a buyout. The stock rose as much as 22 per cent before falling back later in the day after a company spokesman said they didn’t know of any material reason for the move.

Smurfit Kappa was another gainer on the day in the absence of any stock specific news. The company closed 2.18 per cent higher at €28.15.

Budget airline Ryanair outperformed its aviation peers on the day, closing up 2.2 per cent at €10.68.

Total Produce and Origin Enterprises were the two losers on the smaller index, albeit with low volume and minor falls.

The FTSE 100 rose 0.7 per cent, scaling its highest level since August 29th, boosted by shares of companies that book a major chunk of their revenue overseas.

AIM-listed Telford Homes climbed 13 per cent to 356 pence, on their best day in almost 10 years, after US real estate firm CBRE said it would buy the British residential property developer for 350p a share in cash.

Supporting the mid-cap index was cyber security firm Sophos, which advanced 8.2 per cent, while peer Avast rose 2.5 per cent, after sources said chipmaker Broadcom was in advanced talks to buy Symantec.

Drinks makers fizzed amid hopes of a favourable review into the so-called sin taxes on products high in salt, fat and sugar promised by Boris Johnson. Shares of Britvic and sweetener maker Tate & Lyle rose 2 per cent.

The blue-chip euro-zone Stoxx index closed up 0.9 per cent having touched its highest level since mid-June last year, while the pan-European Stoxx 600 was also up 0.9 per cent.

Italy’s MIB touched a two-month peak, with its bank index surging 5 per cent, after the European Commission dropped its threat of disciplinary action against the country.

Putting a damper on some chip stocks was news that the US commerce department’s enforcement staff were told this week that China’s Huawei should still be treated as blacklisted. European chipmakers STMicroelectronics and Infineon fell 0.6 per cent and 0.9 per cent on the news.

German lighting group Osram shot up 11.5 per cent to the top of the Stoxx 600 after sources said its supervisory board was convening an extraordinary meeting on Thursday to discuss a takeover offer from private-equity firms Bain and Carlyle.

The healthcare sector gained 0.38 per cent, the biggest boost to the S&P 500, helped by gains in Johnson & Johnson, UnitedHealth Group and Merck & Co.

The financial sector was flat, while bank stocks fell 0.37 per cent.

Among specific stocks, Symantec surged 14.5 per cent after sources told Reuters that chipmaker Broadcom is in advanced talks to buy the cybersecurity company. Broadcom fell 3.6 per cent.

Tesla rose 6.4 per cent after the electric carmaker set a record for quarterly vehicle deliveries in a triumphant response to months of questions about demand for its luxury electric cars. – Additional reporting: Reuters