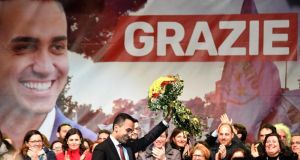 European shares bounced off six-month lows on Tuesday as the focus shifted from politics to dealmaking and earnings, with paper and packaging stocks soaring after Smurfit Kappa rejected a bid approach.

The pan-European STOXX 600 index ended up 0.1 per cent, coming off earlier highs following a late drop on Wall Street, while Italy’s benchmark index recouped all of its losses from the previous session, up 1.8 per cent, as concerns over political uncertainty following an inconclusive election result eased.

“Italy is going to be so . . . tied up for months that in a way it’s almost a blessing because there will not be any ability to do anything unconventional. In a way that is quite comforting for the market,” Ken Odeluga, market analyst at City Index said.

After being battered last week because of the weather, Ryanair was steadier, closing largely unchanged at €15.87. PaddyPower Betfair was down marginally at €92.50 after missing on the sale of William Hill’s Australia unit, which was sold to CrownBet for £168 million.

The three Iseq-listed property Reits – Hibernia, Ires and Green – all performed strongly, ending up 3.5 per cent, 1.8 per cent and 2.7 per cent respectively. One trader said the companies may have been buoyed by strong results from counterpart companies in the UK.

Smurfit Kappa’s London-listed shares closed up 19.6 per cent, their biggest ever one-day jump. “We believe an offer above €33 per share would be realistic” to start discussions between both groups, US investment bank Jefferies said in a note. It also noted a “positive M&A read” to packaging peers DS Smith and Mondi. The two groups, listed in London, rose 5.6 and 2.3 per cent respectively and were among the session’s top gainers.

German autos Volkswagen, Daimler and BMW – hit earlier this week by concerns over a trade war after US President Donald Trump proposed imposing tariffs on steel and aluminium – also rose. Those worries have dissipated slightly as Trump faces a growing pushback from political and diplomatic allies as well as US companies. Their gains helped European autos rise 1.2 per cent.

Weighing on the Dow and S&P 500 were health insurer UnitedHealth and planemaker Boeing, while Microsoft was the biggest drag on the Nasdaq. “We’ve been moving a per cent or more on many days, I don’t think there are any developments today that create the actions,” said Michael O’Rourke, chief market strategist at JonesTrading in Greenwich, Connecticut. “People are just trading around their positions in the current environment.”