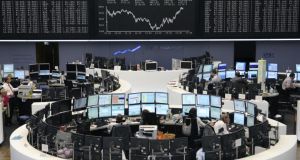 European stocks fell in early trade this morning as unease about the threat of a military strike against Syria prompted some investors to cash in on recent strong gains. US index futures and Asian shares also fell.

Mining shares featured among the top losers, falling after copper group Antofagasta posted a sharp drop in profits, hurt by rising costs and lower metal prices. Its shares fell 2.7 per cent, while Rio Tinto was down 1.9 per cent and Anglo American down 0.9 per cent.

“The market has gone up a bit fast lately, and a lot of fund managers have already reached their targets for the year, so it’s tempting to book profits now that geopolitical risks are rising,” said Philippe de Vandiere, analyst at Altedia Investment Consulting, in Paris.

The Euro STOXX 50 has surged 13 per cent since late June, outpacing Wall Street’s S&P 500, up 6 percent over the same period.

PSA Peugeot Citroen rose 2.7 per cent after UBS raised its recommendation on the shares.

“An escalation in geopolitical tension is not good for investor sentiment. People might just be waiting for some clarity before they look to react,” Keith Bowman, equity analyst at Hargreaves Lansdown, said.

Italian shares this morning reversed part of recent sharp losses, with the FTSE MIB up 0.3 per cent after 2.1 per cent drop in the previous session due to fears the country’s simmering political crisis could bubble over.

On the economic front, markets showed little reaction to Germany’s IFO business climate index for August, which came in slightly ahead of expectations.