CRH leads the advance on the Iseq 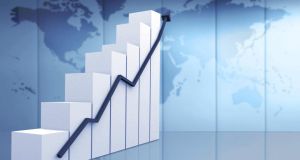 
Better than expected earnings results saw markets across the globe advance yesterday, bringing the Irish market with them.


DUBLIN
“Everything was up today,” is how one Dublin broker reflected on the Iseq’s performance yesterday, as it followed the lead set by European markets to advance by 2.63 per cent, or 100.73 points, to close up at 3,930.60.

Index heavyweight CRH was to the fore of the bull market, adding 86 cent, or 5.6 per cent to close up at €16.21. The strong performance from the stock might have been in part due to the good data coming out of the US with regards to road building programmes gathering pace.

Drinks group C&C also pushed ahead, as investment bank Goldman Sachs put it on one of its preferred stock lists. It added 19 cent, or 3.8 per cent, to finish up at €5.00.

Following Davy’s downgrade of Paddy Power on Monday, which led to a sell-off in the stock, the company rebounded yesterday, adding €2.06 or 3.3 per cent to close up at €63.59.

Less buoyant was packaging group Smurfit Kappa , which continues to struggle to get back above €11.90. It under-performed the market, closing up by 12 cent, or 1 per cent at €11.90.


LONDON
UK stocks advanced the most since their first trading day this year as companies from ARM Holdings to Associated British Foods reported sales that exceeded analysts’ estimates.

“The sentiment is positive and investors are recouping the losses of last week,” Lorne Baring, managing director of B Capital in Geneva, said. “Earnings expectations are low, so good news is being seized upon as light at the end of the tunnel.”


EUROPE
European stocks jumped the most in eight months as speculation grew that the European Central Bank will cut interest rates.

“We are reasonably positive and look for another 7 to 10 per cent on equities worldwide this year,” said Alan Higgins, chief investment officer at Coutts in London.

Cie Financiere Richemont reported results that topped estimates resulting in the stock surging the most since 2008 as the maker of Cartier jewellry said net income climbed. It rallied 8.3 per cent to 73.80 Swiss francs, the biggest gain since December 2008.


US
US stocks rose, sending the Standard and Poor’s 500 Index higher for a third day, as earnings from Travelers to Netflix beat estimates and new-home sales rose in March.

Netflix jumped 24 per cent to $215.92 for the biggest advance in the S&P 500 after acquiring more new subscribers than analysts forecast. The company said it gained two million new US customers last quarter, reaching 29.2 million.

Coach , the largest US luxury handbag maker, climbed the most since October, adding 9.9 per cent to $55.60 as quarterly profit and sales both exceeded analyst estimates.

Bank of America rose 3.6 per cent to $12.14 for the biggest gain in the Dow. Morgan Stanley upgraded the second-largest US lender to overweight because expense savings are greater than potential legal costs.

1 Columbia Sportswear defies gloom with first Irish standalone shop
2 ‘The rental situation stops me moving back home’
3 Why are markets booming when a crash is on the way?
4 Restaurants file court actions against insurers over lockdown losses
5 Could your old car be giving away all your secrets to its new owner?
6 Brexit: System agreed for Irish goods to skip checks on UK trade
7 Second Covid-19 outbreak and no-deal Brexit an appalling vista
8 VAT cuts are for businesses – consumers will still pay the same
9 How to further divide the economy using the wage subsidy
10 Income tax receipts prove remarkably resilient to coronavirus
Real news has value SUBSCRIBE