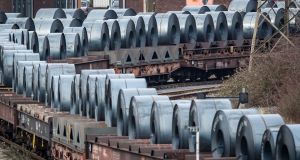 The US plans to impose levies on steel and aluminium imports from the European Union, Canada and Mexico. Photograph: Lukas Schulze/Getty Images

The Iseq rose on Thursday, driven by CRH, and counting as a rare bright spot across Europe as the wider market was rattled by news that the US plans to impose levies on steel and aluminium imports from the European Union, Canada and Mexico.

The Iseq added 0.4 per cent to 7,140.86, buoyed as market heavyweight CRH soared 3.7 per cent to €31.60 as the group signalled that it is open to offers for its low-margin European distribution business, while also forecasting that it will have the capacity to spend €7 billion over the next four years to boost shareholder returns.

Analysts said they expected most of the cash to be spent on higher-margin business.

“The company’s ability to generate strong and sustained cash flow has long been underappreciated,” said Davy analysts Robert Gardiner and Barry Dixon. “We expect to see this potential reflected in the share price and valuation.

However, banks were out of sorts as sector followers continued to monitor events in Italy and as Deutsche Bank’s US unit was reported to have been added to the American banking watchdog’s list of banks with serious weaknesses that threaten their survival.

The Ftse 100 index ended the day down 0.2 per cent at 7,678.2 points, as financial stocks weighed on the market on the day as Deutsche Bank shares tumbled.

Shares in miners Anglo American, Randgold Resources, BHP Billiton and Evraz rose 1.2 per cent to 5.8 per cent as metal prices were boosted by positive manufacturing data from China, the world’s top metal consumer.

Chemicals group Johnson Matthey rose 3.4 per cent after it declared a 7 per cent increase in its final dividend.

Shares in rail and bus operator FirstGroup sank 19 per cent after the company replaced its chief executive, following what its chairman called a disappointing year, and said it was putting its Greyhound bus business in the US under review.

The pan-European Stoxx 600 index lost 0.6 per cent to 383, as investors moved their focus to comments from US commerce secretary Wilbur Ross that the Donald Trump administration would impose levies of 25 per cent on steel imports and 10 per cent on aluminium imports from the EU, Canada and Mexico.

Shares in steel pipe maker Tenaris fell 3.2 per cent, while steelmakers Thyssenkrupp and Salzgitter fell more than 1 per cent.

Deutsche Bank tumbled 7.1 per cent to a record low of €9.16. The bank declined to comment on a Wall Street Journal report that the US authorities last year designated its US operations to be in “troubled condition”.

“The news clearly indicates the pressure Deutsche bank is under from US regulators and the need to quickly restructure operations,” Thomas Hallett, banking analyst at KBW said.

“The bank has failed to sufficiently restructure the business to operate in a low-interest rate and regulatory constrained environment,” he added.

Also on Thursday, German magazine Wirtschaftswoche reported that Mr Trump wanted to block German luxury cars from the American market. Shares of BMW, Daimler and Volkswagen fell between 0.9 and 2 per cent.

Mexico pledged to retaliate against the US’s planned steel and aluminium tariffs by targeted US imports including pork legs, apples, grapes, cheeses and steel. Shares of US food companies such as Tyson Foods and Kraft Heinz fell. Boeing and Caterpillar were also out of sorts.