AIB, Bank of Ireland, Permanent TSB all advanced by more than 4.9 per cent 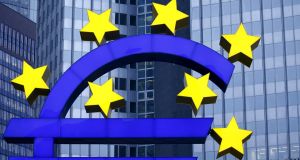 The ECB said it would expand its quantitative easing programme from €60 billion to €80 billion a month and cut the main interest rate from 0.05 per cent to 0 per cent, but was unlikely to reduce it any further.

Banking stocks led the charge on markets after the ECB dampened the prospect of further cuts to interest rates.

Lenders such as Banco Popular and Bankia of Spain and Italy’s UniCredit and Intesa Sanpaolo jumped between 7.5 per cent and 12.8 per cent.

In Dublin, Bank of Ireland shares soared, closing up 8.1 per cent at 29 cent , with 120 million shares traded.

The ISEQ index of Irish shares closed up 2.4 per cent at 6,341.75 with most of the main players from CRH to Ryanair to Smurfit Kappa ending the day in positive territory.

In London, Standard Chartered, Barclays and Royal Bank of Scotland saw their stock prices surge as the outlook for their profits brightened with Mr Draghi seeming to rule out further cuts in interest rates

Barclays, Royal Bank of Scotland Group and Standard Chartered all advanced at least 3.6 per cent.

“There’s an incredible rebound because the chatter on easing became extremely positive after the market closed yesterday and all the global markets are rallying on that,” said Phil Davis, chief executive of PSW Investments.

The broader European stock market fell in the previous session and the euro rose after Mr Draghi said more interest rate cuts were unlikely, but bank shares outperformed on plans for a new round of cheap funding.

“The overnight recovery in market sentiment suggests markets may be coming round to a similar view, the ugly indigestion finally subsiding,” he said.