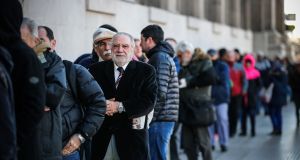 People line up in front of a bank in Buenos Aires on Monday during another day of uncertainty after the financial restrictions promoted by the government. Photograph: Juan Ignacio Roncoroni/EPA

Argentina’s peso surged on Tuesday, pumped up by Wall Street traders, back after a long holiday weekend, cheering President Mauricio Macri’s capital controls that are aimed at protecting the beleaguered currency.

The peso was 5.36 per cent stronger at 56 to the dollar, traders said. Argentina country risk also fell after soaring last week to levels not seen since 2015.

Traders said the central bank intervened in the afternoon by selling dollars from its reserves, but the bank declined to comment. The bank has heavily intervened in the past, selling nearly a billion dollars in the second half of last week alone.

“All the markets are in the red and a weakened country like Argentina, with a complicated political situation, gets hits even more,” said Hector Scasserra, director of local brokerage firm Arpenta Sociedad de Bolsa.

The currency rebound gives some relief to Mr Macri, after a shock primary election battering last month sparked a sharp crash in the country’s bonds, equities and the peso, which lost about 26 per cent of its value against the greenback in August alone.

In Europe, the pounding of Argentina’s bonds also eased after they had fallen to record lows on Monday, while there were tentative gains in some foreign-traded bank shares. Brokers were quoting marginally higher prices for Argentina’s badly mauled sovereign debt in Europe.

On Sunday, the government authorised the central bank to restrict purchases of dollars as it burns through its reserves to prop up the peso. The currency controls were a 180-degree turn for Mr Macri, a free-markets advocate who abolished capital controls after he came to power in 2015.

It was the government’s latest attempt to stabilise the peso, which has lost 28 per cent of its value since opposition presidential candidate Alberto Fernandez emerged as the clear front-runner in the August 11th primary election. – Reuters