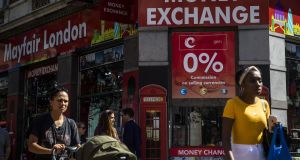 Against the euro, the British currency weakened to 91.265 pence at one point, its lowest in nearly a week, trading last down by 0.5 per cent at 90.7 pence. Photograph: Simon Dawson/Bloomberg

Sterling fell on Wednesday as concerns rose that the United Kingdom may be headed for a disruptive no-deal Brexit after prime minister Boris Johnson moved to restrict parliamentary time before October 31st.

Mr Johnson said on Wednesday he would schedule a queen’s speech for October 14th in order to launch new legislation. He denied he was seeking to prevent parliament from obstructing his Brexit plans.

On Wednesday, the pound was the worst-performing developed market currency, falling as much as 1 per cent against the dollar to trade below $1.22 before regaining some lost ground to close 0.41 per cent weaker at 1.224.

Against the euro, the British currency also weakened to 91.265 pence at one point, its lowest in nearly a week, trading last down by 0.5 per cent at 90.7 pence.

Sterling had rallied in recent days on hopes that Britain’s opposition parties can stop a no-deal Brexit. On Tuesday, it hit a one-month high against the dollar and the euro.

Investors are now braced for an unnerving ride in foreign exchange markets in the run-up to the Halloween deadline for the UK’s exit from the EU.

Shifts in the options market, where bets are made on exchange rates, show expectations for sterling volatility have hit their highest level since the start of the year. Bets shot up on Wednesday after the prime minister’s move.

Investors’ expectations for swings in sterling over the next three months rose 5.5 per cent on Wednesday to their highest since January when former prime minister Theresa May tried to force her original Brexit deal through the House of Commons.

Moves in contracts for one-month volatility were sharper. These rose as much as 7.5 per cent, indicating that some investors expected a decisive break in the currency in one direction or the other to occur in September.

“The pound appears to be taking the strain of any news flow related to Brexit and we would expect the volatility to continue,” said Georgina Taylor, a fund manager at Invesco.

The pound has fallen sharply under the new government as traders reassessed the probability of the UK leaving the EU without a deal. Over the past six weeks, sterling has traded within a range of between $1.20 and $1.23.

Richard Falkenhall, senior FX strategist at Nordic bank SEB, said the pound was likely to fall further following the developments in Westminster. “We are now getting into what seems to be an ugly battle between the new pro-Brexit government and the lower house; a battle in which apparently all means will be used to reach the objective, either to leave on October 31st or to delay a withdrawal,” he said.

Paul Dales, chief UK economist at Capital Economics, said he expected developments to become “very hectic” as soon as next week. “Parliament may try to make the most of one of its last opportunities to prevent a no-deal Brexit by trying to bring down the government,” he said. – Copyright The Financial Times Limited 2019/Reuters

1 Aer Lingus confirms job cuts due to ‘decimation in demand’
2 Major credit union plans to limit savings accounts to €40,000
3 Passengers face queuing in car parks at Dublin Airport
4 Why is Germany suddenly embracing its inner Keynesian?
5 In six months we will be in the grip of a 1980s-style recession
6 Ikea among major retailers to reopen next week
7 Domestic economy may get boost from multinationals
8 Penneys will not reopen on Monday despite expected changes to lockdown rules
9 AstraZeneca targets two billion doses of coronavirus vaccine
10 Student accommodation sector set for harsh Covid-19 lesson
Real news has value SUBSCRIBE