Hibernia Reit was the big gainer of the day in Dublin, closing up 5 per cent at €1.11 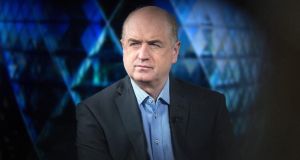 Ryanair finished 0.9 per cent lower at €6.91, with the airline announcing that Howard Millar plans to step down as deputy chief executive and chief financial officer in December

European stocks were little changed, with the Stoxx Europe 600 Index capping its fourth straight quarterly gain, as contracts to buy previously owned US houses jumped in May by the most in four years.

The Iseq overall index in Dublin closed down 0.55 per cent at 4,698.16. DUBLIN Hibernia Reit was the big gainer of the day in Dublin, closing up 5 per cent at €1.11 after announcing it had exchanged contracts to acquire the Observatory Building in Dublin’s docks area for €52.25 million.

Hibernia said that when rent-free periods expire over the next 18 months, the building will generate a net yield of 4.1 per cent. It has concluded eight acquisitions since listing, committing €307 million or more than 82 per cent of the net proceeds raised in December 2013.

Airline stocks across Europe were impacted by a negative report on UK low fares carrier EasyJet, which slid to a seven-month low after Bank of America lowered its recommendation to underperform from neutral, citing a lack of earnings growth amid industry overcapacity.

The five most traded stocks in Dublin yesterday were CRH, Smurfit Kappa, Ryanair, Bank of Ireland and Kerry Group. LONDON UK stocks were little changed, after two days of gains, with the benchmark FTSE 100 Index posting its third monthly decline this year.

Diageo advanced 1 per cent after Natixis added it to a list of recommended stocks. Mecom jumped 33 per cent after agreeing to a takeover offer from De Persgroep NV.

EasyJet slid to a seven-month low after Bank of America lowered its recommendation on the airline.

The FTSE 100 Index slipped 13.83 points, or 0.2 per cent, to 6,743.94 at the close in London. EasyHotel added 9.4 per cent to 87.5 pence on its first day of trading. EUROPE Royal Philips climbed the most in eight months after saying it’ll merge its LED-component and automotive-lighting units into a €1.4 billion separate company.

Vestas Wind Systems advanced 2.9 per cent after getting orders for 450 megawatts from Electricité de France‘s renewable unit. H Lundbeck fell 9.1 per cent after saying its stroke treatment desmoteplase failed in a late-stage study. The Stoxx 600 slipped less than 0.1 per cent to 341.86 at close of trading. The gauge climbed 2.3 per cent in the second quarter, for its longest stretch of gains since March 2010. NEW YORK US stocks fluctuated near record levels in early trading, with the S&P’s 500 Index heading for the longest stretch of quarterly gains since 1998, as a jump in pending home sales offset weaker-than-forecast manufacturing data.

MannKind jumped 9.6 per cent, signalling the maker of diabetes drugs will rebound from its worst week in two months.