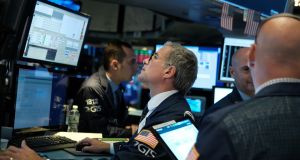 Oil and gas explorer Providence Resources rose 0.33 per cent to 6 cent after shareholders approved its plan to sell new shares to raise $3.76 million. Chief executive Tony O’Reilly jnr told an extraordinary general meeting that the company still expects to get a $9 million loan from Chinese partner Apec Energy Enterprises, despite the cash’s arrival having missed several deadlines. Providence gave Apec until close of business on Monday to deliver the money.

Building materials group and index heavyweight CRH added 0.99 per cent to €31.59. International packager Smurfit Kappa ticked up 0.44 per cent to €27.30.

Premier Inn owner Whitbread was one of the blue-chip Ftse 100’s biggest fallers, as investors were spooked by Barclays decision to downgrade the hospitality business.

The company’s stock has fallen in value by almost 10 per cent over the past year, after it warned of Brexit uncertainty and growing competition for hotel rooms in the UK. Shares in Whitbread closed down 173p , around 4 per cent, to 4,294p at the end of trading.

Woodford Patient Capital Trust saw shares rise after the fund warned celebrity stock picker Neil Woodford that he might be shown the door from the business bearing his own name.

The board of the listed trust said it was speaking to other fund managers to potentially replace Mr Woodford, as it revealed that the value of the fund fell 20.9 per cent between June 28th and September 26th to £591 million sterling.

Shares in Woodford Patient Capital Trust finished Monday’s session up 0.9p or 1.1 per cent, to 44.9p.

Metro Bank shares moved higher after reports that activist investor Elliott Advisors is considering buying a stake in the troubled lender. Shares in the troubled bank rose 7.3p to 200p.

Weakness in the underlying silver market weighed down on Fresnillo, although UBS also raised its target price in the silver miner. Fresnillo saw shares slip 19.4p to 683.6p at the close of play.

The first day of a historic class-action lawsuit against Volkswagen AG failed to dent the German car maker’s shares. They advanced 1.25 per cent to €157.60 in Frankfurt. The case, stemming from the emissions control scandal in 2015 and involving 450,000 owners of diesel Volkswagen cars, began in a German court on Monday.

However, it could take three or four years to establish points of law, after which drivers can file compensation claims, so observers say it may not pose an immediate threat to the company.

Euro-zone blue-chips rose 0.7 per cent on Monday as companies that earn their revenue in dollars were boosted by a fall in the euro on concerns about euro-zone growth.

The benchmark Stoxx 600, which tracks leading shares across 18 western European markets, ended September 3.4 per cent up.

US stocks were higher on Monday after the technology sector surged on the back of gains in Apple shares.

Shares of the iPhone maker, whose European base is in the Republic, rose 2.3 per cent as chief executive Tim Cook told a German daily that sales of the newly launched phones were off to a strong start, while JP Morgan raised its forecast for shipment volumes. Another tech giant with an Irish presence, Microsoft Corp, climbed 1 per cent. – Additional reporting: Reuters