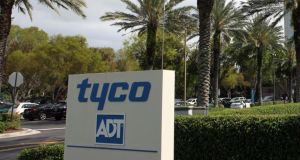 Multinational Tyco expects to hire an estimated 600 employees in Cork over the next three years, bringing its total employment in Ireland to approximately 700 (Photograph: Eliot J. Schechter/Bloomberg)

The multinational’s new global headquarters is located in Cork, at the same site as its global business services centre, which was established earlier this year. Tyco expects to hire an estimated 600 employees in Cork over the next three years, bringing its total employment in Ireland to approximately 700. Tyco’s operational headquarters is in Princeton, New Jersey.

Back in 2008, Tyco pulled its manufacturing plant out of Cork, making 320 people redundant and leaving a skeleton crew of just 30. According to Tyco, the service centre in Cork enables the company to improve its efficiency of processes in several central support functions, including sourcing and procurement, customer service, R&D, information technology and finance.