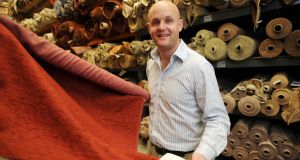 Ciarán Finane of Finline Furniture: “I can’t underestimate how lucky we’ve been with our staff.” photograph: bryan meade

Finline Furniture was established in 1979 in Emo, Co Laois. The years have seen an ebb and flow in fortune for the business, but with sons Ciarán and Killian at the helm, as sales and operations directors, the business has just opened a new showroom in Cork and a bright future beckons both domestically and internationally.

Founder Kieran Finane had worked for Vita Cortex, distributing foam products to bed and sofa manufacturers, before launching his own furniture business in the late 1970s with his wife and co-director Bridget, who passed away two years ago. They purchased a greenfield site in the village of Emo, where they became one of the area’s main private employers.

With two sons and two daughters, the business was always a topic of conversation.

“As a young fella, I didn’t have much interest in working in the business, having spent summer holidays stuffing cushions, cutting fabric and loading vans,” says sales director Ciarán who, along with his brother, now runs the business (his father keeping a close eye on quality all the while).

“My parents worked very hard to build the business up – my mother working till 2am every night after putting us kids to bed and my father travelling a lot for business. It was a classic family business, always talked about at home.”

Production ramped up in the early 1980s when they supplied the likes of Brown Thomas and Casey’s in Cork and Limerick. The business operated on a wholesale model until recently, supplying upmarket stores in Ireland and Britain with Finline and own-brand suites of furniture. UK stores include Barker and Stonehouse and Stokers Fine Furniture, and the company continues to produce own-brand furniture for a number of retailers.

The UK market was worth 40 per cent of company turnover before the recession but suffered a fall after 2007, before recently springing back to about 18 per cent of turnover.

Finane’s father attests that the latest recession was much tougher than that of the 1980s.

“We would have been so small in the 1980s that we would have been flat out with the four to five guys we employed then. Last time round we would have gone from a staff of 50-plus to around 30 in 2008-2009. We’ve grown that back up to around 40 – re-employing people as much as possible, because upholstery is a very skilled job. It takes about five years to become a master upholsterer.”

Finane is keen to stress the importance of the company’s loyal staff. “I can’t underestimate how lucky we’ve been with our staff. Some of them [and all from the local area] have been with us for 18 years.”

Finline has always pitched itself at the top end of the market, with sofas costing anywhere between €900 and €1,900. In his father’s time the business would have produced around five different models at any one time in a variety of fabrics. Now the company offers 60-odd models and a vast array of fabric choices designed by an in-house design team and a number of designers employed by the company in the UK.

One of the benefits of opening retail stores (they have three – in Dublin, Cork and Emo) is being able to work with customers to custom-design product. In 2008 the direct retail side of the business didn’t exist. Now it accounts for about 50 per cent of business. Finane visits the major fabric fairs such as Heimtextil, in Frankfurt, the London Fabric Fair and Mood Brussels each year.

The company has worked with many hotels such as Ballynahinch Castle, Hayfield Manor and Lough Erne Resort, where they were selected to provide furniture prior to the G8 Summit in 2013.

Finane believes a strong online presence is essential in the business. He believes the customer may do research online but will still want to sit on a couch before they invest. Instagram, Pinterest and Facebook are growing media for the firm.

“We hope our retail side of the business will continue to grow, whilst growing our export business,” says Finane.

“We’ve seen a return to profit in the past two years, while during the recession we were keeping our head above water.” finlinefurniture.ie