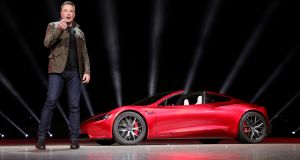 Saudi Arabia’s sovereign wealth fund is in talks that could see it becoming a significant investor in Tesla as part of Elon Musk’s plan to take the electric car maker private, according to a person with direct knowledge of the fund’s plans.

The Public Investment Fund, which has built up a stake just shy of 5 per cent in Tesla in recent months, is exploring how it can be involved in the potential deal, the person said on condition of anonymity.

Discussions began before the controversial tweet last week by Mr Musk, who is Tesla’s cofounder and chief executive officer, saying he was weighing a plan to take the company private.

It comes as Tesla and Mr Musk were sued over the weekend by investors who said they fraudulently engineered a scheme to squeeze short-sellers, including through Mr Musk’s proposal to take the electric car company private.

The lawsuits were filed three days after Musk stunned investors by announcing on Twitter that he might take Tesla private in a record $72 billion (€63 million) transaction that valued the company at $420 per share, and that “funding” had been “secured”.

In one of the lawsuits, the plaintiff Kalman Isaacs said Mr Musk’s tweets were false and misleading and, together with Tesla’s failure to correct them, amounted to a “nuclear attack” designed to “completely decimate” short-sellers.

Tesla did not respond to a request for comment on the proposed class-action complaints filed in the federal court in San Francisco. The company is based in nearby Palo Alto, California.

Short-sellers, who borrow shares they believe are overpriced, sell them and then repurchase shares later at what they hope will be a lower price to make a profit, have long been an irritant for Mr Musk.

Mr Musk’s August 7th tweets helped push Tesla’s stock price more than 13 per cent above the prior day’s close. The stock has since given back more than two-thirds of that gain, in part following reports that the US regulator, the Securities and Exchange Commission (SEC), had begun inquiring about Musk’s activity.

The SEC, which has been gathering information about Tesla’s public pronouncements on manufacturing goals and sales targets, is intensifying its scrutiny of the company’s public statements in the wake of Musk’s tweet, people familiar with the matter have said.

The Public Investment Fund sees its investment in Tesla as a strategic way for the world’s biggest crude producer to hedge against oil, the person said. The Saudi fund hasn’t made any firm decisions on whether to increase its stake, or by how much, but talks are ongoing, the person said. It wasn’t immediately clear how much the fund would invest in Tesla.

The Saudi wealth fund’s current stake in the company is valued at about $2 billion. The government is planning to turn the Public Investment Fund into a $2 trillion powerhouse to help diversify the kingdom’s oil-dependent economy.

‘I’m bad at haggling but very jealous of people who get great deals’ 00:00
Will daughter get CGT exemption for renting home in 2014? 16:18
Food intolerance group to double workforce as it expands 14:41
Chris Johns: Era of free money could be coming to an end 11:04
Higher food prices looming for Irish shoppers 11:01
Search executive
jobs on irishtimes.com