Sales of the Peugeot manufacturer fell to 1.9m light vehicles in January-June, from 2.18m a year earlier 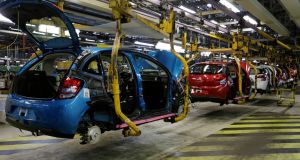 Sales of French car-maker PSA fell 12.8% in the first half of the year. Photograph: Jackie Naegelen/Reuters

French car-maker PSA’s vehicle sales fell 12.8 per cent in the first half as emerging markets weighed on its overseas business, challenging the trajectory of the Peugeot manufacturer’s recovery.

Sales fell to 1.9 million light vehicles in January-June, the company said on Monday, from 2.18 million a year earlier.

PSA, which has notched up successive sales and profit records under chief executive Carlos Tavares, is due to report full earnings for the period on July 24th.

In Europe, its biggest market by far, PSA eked out a 0.3 per cent gain in sales that lifted its share of an automotive market down 2.5 per cent overall. The Opel-Vauxhall business acquired from General Motors in 2017 also gained ground in the region.

“Despite the decline of the global automotive markets for this first half, our commercial teams have managed to increase market shares in several countries,” Tavares said in the company statement.

PSA recorded sharp declines almost everywhere else, however, with deliveries down a further 60.6 per cent in China, where the group has suffered a protracted sales collapse at its joint ventures with local manufacturers Dongfeng and Changan. – Reuters