Dublin Vinyl looking to raise up to €400,000 via crowdfunding 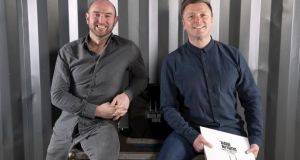 Donagh Molloy and Hugh Scully of Dublin Vinyl. “We’ve done feasibility studies through Enterprise Ireland on other markets and really think we can make a go of this,”says founder Scully, a former DJ

Dublin Vinyl, a company that opened its own record-pressing plant last year, is aiming to raise up to €400,000 in a crowdfunding campaign as it looks to expand capacity at its Glasnevin facility and start selling direct to consumers.

The Enterprise Ireland-backed company, which works with some of the world’s leading major labels and independents, is seeking to raise the money through the website Seedrs.

Dublin Vinyl is offering about 8 to 10 per cent equity in the company through its campaign, valuing the business at about €5 million.

It comes as the company looks to start manufacturing and supply product directly to musicians, DJs and dedicated music fans outside of the Republic.

The move also coincides with rising demand for records with vinyl sales hitting their highest in 30 years in the US last year. Locally, revenues were up 28 per cent in the first quarter compared to the same period a year ago.

“We’ve done feasibility studies through Enterprise Ireland on other markets and really think we can make a go of this,” said founder and chief executive Hugh Scully, a former DJ.

Dublin Vinyl was originally focused on servicing local and international record labels and distributors, but Mr Scully said it began to see a strong demand from consumers who wanted to avail of its services.

It initially responded to this by expanding label partnerships and introducing a subscription club, which ships essential albums to members across Ireland and Britain every month. The service now has 500 subscribers and Dublin Vinyl has plans to grow that by a similar number month-on-month.

With fulfilment centres in Belfast and Dublin, the company is looking to offer direct-to-fan services by manufacturing, warehousing and shipping directly to consumers all over the world with a particular focus on Japan and North America, where vinyl is particularly popular.

Overall, the company is expecting to invest €1 million in expansion-related activities over the next year with its subscription club at the centre of its plans.

“Record subscription clubs have become big business in the US with companies such as Vinyl Me, Please having up to 50,000 subscribers but we have an additional advantage in that we obviously manufacture vinyl rather than just subcontracting it out and also have direct contacts with labels so can get licensing and so on cleared very quickly,” said Mr Scully.

Dublin Vinyl employs eight full-time and four-part-time employees, and raised initial funds for the development of its facility and to purchase pressing machines through private investment and a grant from the Local Enterprise Office. It then went on to raise further funds through the State’s employment and investment incentive scheme (EIIS).

About €1.2 million has been invested in the business to date. Its 9,000sq ft pressing plant in Glasnevin can produce up to 20,000 records a week but the start-up intends to triple that over the next 12 months.

Dublin Vinyl is forecasting revenues of €1 million this year, rising to €5 million next year. The crowdfunding campaign goes live on July 19th.

1 Can we finally say farewell to the scourge of hot-desking?
2 Mortgage arrears: Prevention is definitely better than cure
3 Irish pharma sector warns of protectionism as US corners supply
4 Why gift a son now if it eats into his tax-free inheritance threshold?
5 Flights abroad ban could last all summer
6 Uber agrees to acquire US food delivery group in in $2.65bn deal
7 Welltel acquires IT service provider Novi in €3m deal
8 Government to avoid ‘cliff-edge’ on Covid-19 payment changes
9 Limerick-born entrepreneur gets FDA approval for respiratory monitor
10 Warning over medical supplies, FDA approval and hot desk hell
Real news has value SUBSCRIBE

Uber agrees to acquire US food delivery group in in $2.65bn deal 06:44
Warning over medical supplies, FDA approval and hot desk hell 06:40
Can we finally say farewell to the scourge of hot-desking? 06:00
Welltel acquires IT service provider Novi in €3m deal 05:45
Irish pharma sector warns of protectionism as US corners supply 05:39
Search executive
jobs on irishtimes.com