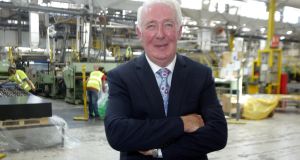 James McGee, chief executive of Athlone Extrusions. He started as a forklift driver at the company’s predecessor more than 45 years ago. “I never got told to go home so I’m still here.” Photographer Eric Molloy

As words of encouragement go, the final words spoken to the 11-year-old James McGee by his headmaster lacked kindness.

He told the young boy, who was leaving school early and without any qualifications to work on the family farm, that he’d probably always be someone who would struggle to feed himself.

Unkind and, as it turned out, inaccurate. McGee has gone on to lead Athlone Extrusions, a leading plastics manufacturing company that has enjoyed phenomenal success over the years.

The firm exports its products to more than 45 countries and employs more than 180 people locally. It announced earlier this month that it is being acquired by the Swiss company Schweiter Technologies for €48 million, having recorded pretax profits of about €8 million last year on turnover that surpassed €62 million.

It’s all pretty impressive, especially when you consider that the guy behind the company’s success started out driving forklifts a couple of days a week at the group’s predecessor more than 45 years ago.

“I never got told to go home so I’m still here,” he says, laughing.

Of course, it hasn’t all been plain sailing. There have been multiple management buyouts (MBOs) and a stock market listing along the way, as well as unwitting participation in the epic takeover battle between Seán Quinn and Tony Mullins for what was then the Barlo Group, and a harsh recession that came close to finishing the company. But somehow the firm has survived.

“I think I’m right in saying that we are the only company that came out of receivership and went on to obtain a listing on the Dublin and London stock exchanges,” says McGee.

We’re in the boardroom at the group’s Athlone headquarters, a 14,000 sq ft factory space on the outskirts of the Co Westmeath town in which McGee was born and near which he still lives.

The workspace below might be noisy with countless machines working at full pelt, but all is calm upstairs as the businessman reminisces on a lifetime spent with the one company.

“There was eveb a moment when we found ourselves participating in an MBO within an MBO of a publicly-listed company. To say it wasn’t easy doesn’t even begin to cover it,” he says.

Athlone Extrusions is one of the leading manufacturers of coloured opaque multilayer plastic sheeting in Europe. The plastic sheets it creates are used in the manufacture of parts for the automotive industry, the sanitaryware sector, and in the office equipment, point of sale and furniture industries.

“We import about 600 tonnes of granular materials in pellet form a week from the likes of Dow Chemicals and, after colour matching it from a library of over 13,000 colours, we produce sheets from 500kg to 200 tonnes for use in everything from off-road vehicles to shower trays,” says McGee.

If the company’s activities seem obscure to most people, its customers are certainly well known.

Cannily, no individual customer accounts for more than 5 per cent of business, something which helps Athlone Extractions effectively manage cashflow and not become too dependent on any client or sector.

With the latest sale of the company due to be completed by the end of July, McGee is due a hefty payout, not that he’d be so gauche as to brag about it.

Explaining his decision to sell up, McGee says Athlone Extrusions needed to be taken to the next level.

“We invested about €6 million in the business over the last few years and, as part of our plan, we were looking to grow turnover to €100 million at this site. But we started thinking about what our options were and how we might expand, and ultimately it led to us deciding that selling would be the best for the future of the company,” says McGee.

Schweiter is a company the businessman knew well because of its involvement in the plastics industry. It also has experience of operating in Ireland, having acquired Polycasa, a sheet packaging firm, which was formerly Quinn Plastics, from Aventas for €120 million two years ago.

“We had a number of offers but settled on Schweiter as the best fit as of their work is complementary to ours.

“Of course, once you decide who the right partner is, you find they might not necessarily want to marry you so there was a bit of romancing between us over a 12-month period before we arrived at the sale,” McGee adds.

“It’s the end of an era and I’ll be sad not to be the owner any more because business has always excited me and many of the people here are friends of mine. I certainly won’t be playing golf every day when I leave. I’ll take my time and look for something interesting to do. Maybe some business mentoring for young people,” says McGee.

The businessman, a finalist in last year’s EY Entrepreneur of the Year awards, is dressed in a suit and tie for our interview. As someone who prefers being on the floor than at a desk though, he admits there is a boiler suit back in the office that he’d prefer to be wearing.

This isn’t surprising. McGee started off on the factory floor before working his way upstairs. He admits his personal assistant does much of the paperwork, giving him the freedom to spend most of his day out of the office.

“I’ve probably done every job in this place and I think it is a big advantage to have come from the bottom,” says the businessman, who still insists on interviewing every new member of staff personally.

“Companies often talk about how people are so important. If that is true then you should put that in practice by spending time getting to know them. So whether it is a cleaner or senior manager, I like to meet them in person to see if they are a good fit for us,” says McGee.

He didn’t have the easiest starts in life, with his father dying when he was just 15 months old, leaving his mother to bring up McGee and his three sisters and to manage the family’s 20-acre farm.

After leaving school early, he worked on the farm before branching out as an agricultural contractor. While he still retains a keen interest in farming, (his son Enda now manages the family’s much-expanded farm), McGee realised early on that his fortunes lay elsewhere.

An Italian businessman had started what morphed into Athlone Extrusions in 1971 when he opened the Grace Road facility to start supplying plastics to the sanitary ware industry. After getting a job driving forklifts at the company before working his way up, McGee and four colleagues acquired it when it went into receivership in 1983, with McGee remortgaging his house to raise the necessary cash.

It was plain sailing for a few years after that, with the company expanding rapidly as it introduced new products such as ABS, a common thermoplastic polymer that can be used for everything from Lego bricks to automotive trim components and protective headgear.

In 1988, McGee led a flotation that was more than seven times oversubscribed. But just two years later he was behind an MBO. McGee and his colleagues agreed to pay 38 times more for the business than they had done seven years previously in order to buy out other shareholders.

McGee then led a mission to grow the business fast through a mixture of organic growth and acquisitions.

“In hindsight, we didn’t have the depth of management needed at that time to successfully grow the business.”

With challenges mounting, it agreed to be bought by Dr Tony Mullins’s Barlo Group for just under €70 million in 2001, with McGee agreeing to stay on for a three-year period.

However, Barlo itself became disillusioned about being a publicly-owned company, with its chief executive leading an aborted MBO in 2004. The offer depended on a parallel demerger of Athlone Extrusions.

In the end, neither McGee nor Mullins was successful with their MBO plans as Seán Quinn swooped in with an €84 million offer to take Barlo private.

“He [Quinn] wanted me to work with him initially but that wasn’t something I wanted to do. I will say that he was always a gentleman to me even if some of his ways of doing business were different from how I would see things,” says McGee.

Having extruded itself from the Quinn Group, McGee started to build up the business again. And then the “Great Recession” hit.

“It was without a doubt the biggest challenge we ever faced. We had to part company with some staff and introduce pay cuts for the rest as business levels dropped by about 30 per cent and two customer s went out of business owing us about €2 million.

“The banks were pretty supportive, but they are fair weather lenders so, when it starts to rain, they want their brolly back quickly,” he says. “We spent money we didn’t have to get us out of trouble, diversifying into yet more products that have done well, but it wasn’t easy at all.”

Having recovered once again, McGee feels the future is bright for Athlone Extrusions, despite concerns over Brexit.

“We haven’t even scratched the surface in some of the countries in which we operate. Even in the UK, which currently accounts for about a third of turnover, there are opportunities. That is even without considering emerging markets, where a lot of our future growth will likely come,” he says.

“I’d say that in five years the company will be even bigger than it is now. As for me, I’ll hopefully still be here enjoying life as best I can,” McGee adds.

Family: Married to Mary, they have two daughters and a son, and three grandchildren.

Something you might expect: He has held numerous non–executive directorships and roles with the likes of Ibec, Enterprise Ireland and Irish Exporters Association

Something you might not expect: He judges at cattle marts in Ireland and Britain