Worldwide lockdowns hit other areas of the business 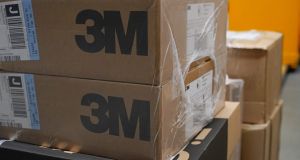 US manufacturer 3M suspended its 2020 financial forecast on Tuesday due to the economic uncerta sinties caused by the coronavirus pandemic, while reporting better-than-expected quarterly profit as it doubled production of N95 respiratory masks.

The company is the world’s biggest maker of the masks and has seen demand spiral as the outbreak spread to a host of major economies, putting 3M at the heart of a tug-of-war over supplies for doctors, nurses and other exposed workers.

In January the company said it was doubling its global output of N95 respirator masks, designed to filter 95 per cent of airborne particles, to 1.1 billion annually.

Under White House pressure, Minnesota-headquartered 3M also reached an agreement earlier this month to import 166.5 million N95 respirators to the United States from China and allow it to continue exporting its US-made respirators.

The worldwide lockdowns, however, are hammering other parts of its business, and it reported falls in revenue at two of its units while those in its healthcare and consumer businesses rose.

The company said as it tries to find its way through the crisis it would begin reporting monthly sales information starting in May to provide transparency on its ongoing business performance.

On an adjusted basis, the world’s main producer of N95 respirator masks earned $2.16 per share in the quarter, beating expectations of $2.03, according to IBES data from Refinitiv.