‘None of us is perfect, but, taken together, we are a pretty remarkable force’ 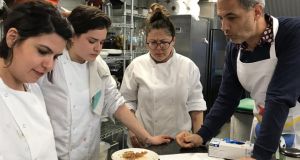 Yotam Ottolenghi with some members of his test kitchen team.

Before our world was turned on its head so abruptly only a few (very long) weeks ago, the centre of my universe outside home was my test kitchen. A modest space underneath a railway arch in Camden, north London, it doubles as a cooking hub and an office. Six of us spend most of our time there, thinking up ideas, testing dishes repeatedly and talking about them ad infinitum.

It’s where concepts take shape and plans for future projects – recipes, articles, books and restaurant dishes, bagged products, cakes and treats of any shape or form – are developed. The general spirit of things to come is dreamed up in the test kitchen.

Its particular nature comes out of its tangibility: the space, the fixtures and, obviously, the people. Like a well-functioning family home, there is an unspoken contract under its roof and the reassuring predictability of its routine, a language that we all speak so easily. It relies on an understanding that we can all be ourselves and play to our strengths.

So what happens when, one day, everything grinds to a halt and we are told to keep away? What is the test kitchen without, well, a test kitchen?

None of us is perfect, but, taken together, we are a pretty remarkable force. There is an unstated respect, or even, dare I say, love, that underpins everything and allows us to work so well together.

So what happens when, one day, everything grinds to a halt and we are told to keep away? What is the test kitchen without, well, a test kitchen?

Perhaps because of my limited imagination, and definitely some apocalypse anxiety, I couldn’t imagine it at all, really. My own and everyone else’s lives were altered so much that the regular machinations of our test kitchen seemed too far-fetched. Everyone had to give up their projects and quickly find somewhere safe to land for an unforeseeable amount of time. That’s a goodbye, obviously, but not a complete one.

The idea of turning our new limitations into strengths came about quickly, as soon as we all realised that, even when away from “home,” we still needed to keep engaging. After a short conversation with Noor Murad, a team member who felt she had to be with her parents and sister in her native Bahrain during the crisis, it quickly dawned on me that the cooking that we’d be doing during the coming period, feeding ourselves and our families, is actually priceless material for us.

The beauty of our job – creating recipes, testing them and spreading the word – is that it can happen anywhere, with very little intent. What is so particular to this moment is that we share our circumstances with many millions across the world, giving the test kitchen work a particular relevancy.

Once back in Bahrain, Noor resumed her recipe testing while cooking for her family. She adapts old recipes to a world with limited pantries, but she is also creating glorious feasts using only humble ingredients and an inventive mash-up of culinary heritages. A chickpea cacio e pepe she made recently was a brilliant way of bringing Europe closer to the Middle East in a time of virtually no travel.

Like Noor, another test kitchen colleague, Ixta Belfrage, who normally spends her time thinking up and cooking new recipes, is pretty much still doing that now, only while living with her parents in West London. Ixta has been pushing her skills, making Chinese hand-pulled biang biang noodles, but, mostly, she is putting the finishing touches to Flavour, a vegetable book she co-wrote with me, publishing this autumn. Ixta and Noor, like the rest of us, have found a vibrant Instagram to be the most effective and immediate channel to get our recipes out to the world.

Gitai Fisher and Verena Lochmuller, two other team members, are isolating by themselves in their London apartments, working to keep the Ottolenghi flame burning until the restaurants reopen. Gitai is also trying recipes for one, and Verena is trying out pastry recipes while substituting key ingredients.

Tara Wigley, the sixth member of our team, who has just written and published a tome of Palestinian cooking, Falastin, with Sami Tamimi, was about to go on a promotional tour when virus broke out. For a short while, she was struggling to come to terms with the cancellation of events she was building up to for the last two years. The reality of having to home-school and look after her three children prompted her to sign up to an arrangement with her two brothers, that she will be cooking for the three families, all living around one garden, while they entertain the children.

Feeding the children is a chance for us to cook and share some crowd-pleasing hits in our home, like cauliflower fritters, jacket potatoes and a meatball toad-in-the-hole

The dishes she is cooking are pretty old-school, to satisfy the kids – big lasagnes, risottos, quiche Lorraine, chicken curry, meatballs in tomato sauce and dauphinoise potatoes – with the twists she needs provided by the flavour bombs in the fridge. These consists of batch-made chilli condiments (Palestinian shatta and Yemeni zhoug, to name a couple), her olives, her capers, her feta and her za’atar, which is, concerningly, running very low right now.

As for me, I also find myself making tons of chilli sauce. My husband, Karl, and I have been in self-isolation for five weeks now, and are still trying to find a routine with our two boys, Max, 7, and Flynn, 4. No day looks like another in our slightly hectic household. Work is done in between entertaining the kids, policing a screen-limit policy, cleaning up after them, trying to educate them, making sure they are not beating each other up too badly, and, mostly, cooking for them.

Feeding the children is a real joy and a way to break up the day nicely. It’s a chance for us to cook and share on social media some crowd-pleasing hits in our home, like cauliflower fritters, jacket potatoes and a meatball toad-in-the-hole, which delights the boys for its name as much as for the crispy crust around the edges of the batter. The chili sauce, though, is the moment for Karl and me to finally assert our rights by upgrading our child-friendly meals with a spoonful of an adult-friendly kick. Our jars of chilli, constantly replenished, are symbols of our sanity and, hopefully, of normalcy soon to return.

This sauce is a fridge staple you can spoon over anything savory, from cooked vegetables or eggs, to salads, grains, meat and fish. It’s spicy but not overtly so. You can bolster the heat by adding dried chile flakes or reduce it by using fewer fresh chiles. (Look for fresh red chiles as they amplify the color of the sauce.) You can add half a teaspoon of sugar, if you like, or make it your own by adding chopped garlic or ginger, and a handful of your favorite herb.

1. Place the chillies and salt in the bowl of a food processor, and pulse a few times until chiles are chopped. (You don’t want to go too far and turn them into paste.)

2. Add the tomatoes and vinegar, and pulse again in two or three short bursts, just enough to break down the tomatoes.

3. Transfer to a lidded container and top with the oil. Cover and keep in the fridge up to a week. – New York Times

Marie Cassidy: ‘People think they know me because I’ve a bit part on a TV show called the news’
4