Makers of Monopoly in the money despite fall in profits

Cartamundi Ireland also manufactures games such as Connect 4 and Scrabble 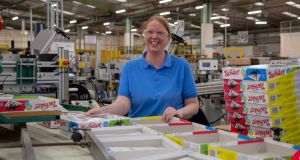 The Irish arm of the games manufacturer Cartamundi paid out a €5.7 million dividend to its parent last year, despite a decline in profits.

Cartamundi Ireland, whose parent was formerly part of games giant Hasbro, recorded pretax profits of €3.6 million for 2019, down from €6.5 million a year earlier as revenues rose to €62 million from €60.9 million.

The Waterford factory, which produces games such as Monopoly, Twister, Connect 4, Trivial Pursuit and Scrabble, earlier this year announced plans to start assembling medical tests as a response to Covid-19. The plant is the largest European games manufacturing plant in the group, employing more than 300 people.

The company’s parent, whose headquarters are in Belgium, is the world’s leading manufacturer of card and board games, and in latter years has also expanded into producing digital products. Its has annual revenues of about $440 million and employs more than 2,500 people globally.

The game maker has been based in Waterford since 1977, originally as MB Games. It was acquired by Hasbro in 1984, with Cartamundi taking over the facility 11 years later.

The company employed 339 people locally last year, up from 316 in 2018. Staff costs, including wages and salaries, totalled €15.2 million, compared with €14.4 million in the prior year.