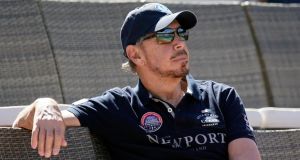 Larry Ellison disclosed a more than $1bn stake in Tesla less than a fortnight after the billionaire Oracle founder was appointed to the board of the electric car maker. Photograph: John G Mabanglo/EPA

Larry Ellison disclosed a more than $1 billion (€870 million) stake in Tesla less than a fortnight after the billionaire Oracle founder was appointed to the board of the electric car maker.

Mr Ellison, who said last October that Tesla was his second-largest investment, was revealed to hold three million shares in the car company, according to a filing to the US Securities and Exchange Commission (SEC).

A close friend of Tesla founder and chief executive Elon Musk, Mr Ellison was appointed to the board of the car maker in late December as part of a settlement with the SEC designed to improve independent oversight at the company.

Mr Musk agreed in September to appoint a new chairman and two independent board members following an SEC lawsuit alleging he misled investors with a series of controversial tweets about taking Tesla private at a price of $420 a share.

During an analyst meeting in October, Mr Ellison said Tesla was his second-largest investment, without giving further detail, and described himself as a “close friend” of Mr Musk. He had been critical of the media’s treatment towards Mr Musk, who last year also courted controversy by smoking marijuana during a live internet radio show and for comments aimed at a British diver during the Thailand cave rescue.

Last week, Tesla’s latest sales figures for the final three months of 2018 fell short of analysts’ forecasts and the company also announced a $2,000 price cut to its vehicles in the US. That spooked investors, who sent the company’s share price down sharply, partially reversing some of its strong run in the back part of last year despite the broader stock market malaise.

The company’s share price gained 6.9 per cent in 2018 in a rocky year for tech stocks. Since Wall Street’s October sell-off, Tesla emerged as one of the more resilient of major and popular tech companies tracked by the NYSE Fang Plus index, and was the last of this group to fall into a bear market, although it has since recovered ground from there. – Copyright The Financial Times Limited 2019

Game Changers: Gary O’Toole took a stand when others turned their heads

1 The $6bn judgment pitting Nigeria against Irish businessmen
2 Owners of Cork shopping centre sue for €30m after car causes fire
3 My aunt never told us that Gran passed away with no will
4 Lidl goes to court over Aldi price survey
5 If it’s safe to do so, could this be the time to spend for Ireland?
6 Dublin banker sells island off coast of west Cork for €5.5m
7 Covid anxiety among domestic holidaymakers could sink this summer
8 Government to push through €2bn credit guarantee scheme next week
9 Ergo set to hit €100m milestone as it weighs up acquisitions
10 Will Revenue come calling with tax bill if inheritance tax threshold falls?
Real news has value SUBSCRIBE

Government to push through €2bn credit guarantee scheme next week 06:00
My aunt never told us that Gran passed away with no will 05:50
Stocktake: Volatility persists as markets remain nervous 05:40
Stocktake: A golden cross for stocks 05:30
Covid anxiety among domestic holidaymakers could sink this summer 05:23
Search executive
jobs on irishtimes.com