Earnings from continuing operations rose 46% to €70.9m at group formerly known as One51 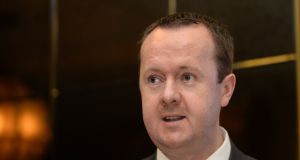 Dublin-based IPL Plastics, formerly known as One51, which has about 2,000 shareholders in Ireland, intends to pursue a sole listing in Toronto as it floats this year, having previously considered a dual Irish listing.

The plan was outlined as IPL Plastics, led by Alan Walsh, unveiled full-year results which showed that the group’s earnings from continuing operations rose by 46 per cent to €70.9 million, outpacing a 36.2 per cent jump in sales to €474.4 million.

The company, which makes rigid plastics used for everything from yoghurt pots to refuse bins, said growth was driven by growing demand for its products and the acquisition of a business in North America last June.

“Trading in 2018 to date has been satisfactory, notwithstanding continued increases in resin and transportation costs and the declining value of the Canadian and US dollars against the euro,” said Mr Walsh.

IPL Plastics received approval from shareholders in December to proceed with a name change and corporate restructuring that would allow two Canadian firms, Quebec-based Caisse de Dépôt et Placement du Québec(CDPQ) and Fonds de Solidarité, to swap their 33 per cent stake in the main division of the company, IPL Inc, for a direct stake in the parent company.

The group confirmed on Friday that the reorganisation was completed at the end of February. They now a combined 43.3 per cent of the company, almost 2 per cent more than had been guided in December.

“As we move forward into 2018, the group is cognisant of elevated levels of global risk factors, including stock market, currency and interest rate volatility, an uncertain global economic climate and the outlook for the UK economy depending on the final agreed terms of Britain’s proposed exit from the EU,” IPL Plastics said.

“Despite these challenges, we are confident in the robustness of the business strategy and the ability of the group to develop profitably and increase shareholder value into the future.”

The Irish Times reported on Friday that IPL Plastics has hired three Canadian investment banks – BMO Capital Markets, CIBC and Royal Bank of Canada’s capital markets division – to help it prepare for an initial public offering (IPO as soon as the middle of the year.

Set up in 2005 as an investment business spun out of food and agri group IAWS (now Aryzta), One51 initially held a diverse range of assets from a 26 per cent stake in infrastructure company to Irish Pride Bakers.

Mr Walsh has spent more than six years unravelling the group’s collection of disparate investments, including a major stake in ferries operator Irish Continental Group, to turn it into a focused rigid plastics company.