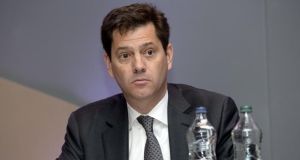 Paper packaging firm Smurfit Kappa rose again in trading in Dublin on Wednesday though the stock was trading below the level of the rejected International Paper bid in mid-afternoon.

The shares were 6.4 per cent higher on the day after the Irish group’s board reaffirmed its rejection of a takeover offer from its US rival which valued the group at €8.6 billion.

Shares in the Irish company, which surged more than 18 per cent on Tuesday after it flagged the approach, rose to a record €36.40 shortly after stock markets opened on Wednesday. They later pulled back slightly and were trading at a level that valued the company at €8.55 billion, slightly below the value of the International Paper offer.

“Smurfit Kappa notes the announcement released by International Paper company setting out the price of the unsolicited and highly opportunistic proposal . . . Shareholders are strongly advised to take no action,” Smurfit Kappa said in a statement.

“The board of Smurfit Kappa has already carefully considered, with its financial advisers, the proposal in detail and has unanimously rejected it on the basis that it fails entirely to reflect the group’s superior prospects as an independent business and represents a valuation multiple significantly below recent comparable transactions,” the statement said.

International Paper said it remained ready to engage with Smurfit’s board and shareholders to discuss both the merits of its bid and the reasons why “it believes it provides the best near- and long-term value for Smurfit Kappa shareholders.”

Smurfit Kappa , which operates in 35 countries in Europe and the Americas, recorded a slight rise in full-year earnings to €1.24 billion last year after a strong fourth quarter. It said on Tuesday that the underlying positive trading conditions had continued into 2018.

1 Four things that could help Ireland escape the Covid-19 recession
2 Ross O’Carroll Kelly column 'not racist towards English people'
3 Brown Thomas and Arnotts shoppers will be able to book time slots for entry
4 Tax and the Pandemic Unemployment Payment: Your questions answered
5 Paschal Donohoe sees consumer ‘prize’ in slow reopening of economy
6 What is in the EU’s €750bn recovery plan and how will it affect Ireland?
7 Job losses in tourism and retail in Dublin could be permanent, new report warns
8 Irish banks’ failure to innovate could leave them written off for good
9 EU needs to rebuild GDPR after only two years
10 Beware of the rush to get back to normal business amid Covid-19
Real news has value SUBSCRIBE