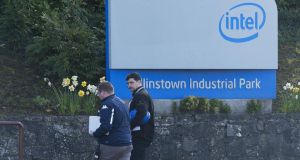 Intel Ireland has been granted planning permission for a revised development proposal at its Leixlip site in Co Kildare that will allow it to bid for a $4 billion (€3.67 billion) chip-manufacturing facility.

It was confirmed on Wednesday that the company’s application for a two-storey development which will provide almost 90,000sq m of additional floor space to its existing campus has been granted planning permission by Kildare County Council.

The multinational already had 10-year planning permission for a larger facility following a successful application in 2013 but it later decided that a smaller facility would suffice and submitted alterations to the existing permission to reflect this.

The plans were scaled down to align with changes in standard designs to Intel manufacturing plants which were made after the 2013 application was granted. This has now been given the go-ahead by Kildare planning authorities.

The new development will contain a number of structures including a boiler building as well as buildings for water treatment, water purification and electrical support.

The plans also include proposals to widen the R148, which skirts the campus, as well as alterations to internal road layouts.

Intel’s Irish division is said to be in competition with Israel to host the multibillion-euro chip-manufacturing plant, and it is thought the proposed development will proceed in line with current plans only if it is successful in its bid.

It was estimated that the development originally granted permission in 2013 would create more than 3,000 jobs during the construction and fit-out phase, although it is not known if the revised smaller layout would reduce this figure.

In a statement released on Wednesday the Kildare Chamber of Commerce welcomed the successful conclusion of the planning process. Chief executive Allan Shine said: “This planning permission now ensures that Intel Ireland can bid for the tender which if successful will create 3,000 construction jobs and in excess of 850 full time jobs once developed.

“This is great news for Kildare and further demonstrates that Kildare is the location of choice for existing and potential business enterprises. I am confident that Intel Ireland will be successful in this bid as Kildare is primed for further development.”