TCI has a €1.2bn stake in the car giant and is demanding reform of executive pay 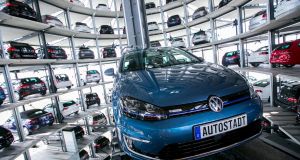 Europe’s most aggressive activist investor has called for a radical overhaul of executive pay at Volkswagen, arguing “corporate excess on an epic scale” encouraged risk taking that contributed to the diesel emissions scandal.

Europe’s most aggressive activist investor has called for a radical overhaul of executive pay at Volkswagen, arguing “corporate excess on an epic scale” encouraged risk taking that contributed to the diesel emissions scandal.

TCI, the hedge fund run by Sir Chris Hohn, has built up a €1.2bn stake in VW and has written to the company’s management and supervisory boards demanding reform of executive pay.

The German carmaker is reeling from the diesel emissions fraud, the worst crisis in its 78 year history, in which it admitted installing defeat devices in up to 11m diesel powered vehicles that served to understate emissions of harmful nitrogen oxides in official tests.

VW reported a €1.6 billion net loss for 2015 - its worst ever result, mainly because of costs stemming from the scandal. VW was also criticised by investors after it emerged that members of its management board secured bonuses for last year. Although some remuneration was withheld, the 12 board members were paid €63.2m in total.

“The dirty secret of Volkswagen group is that for years management has been richly rewarded with massive compensation despite presiding over a productivity and profit collapse,” Sir Chris said.

“We believe that this excessive top management compensation . . . has encouraged aggressive management behaviour contributing to the diesel emission scandal.”

VW had no immediate comment on TCI, which has amassed a 2 per cent stake in the company’s preference stock.

The move against VW ranks as one of the highest profile assaults by an activist investor on a European company since the financial crisis.

TCI achieved notoriety with campaigns that resulted in the resignation of the chief executive of Deutsche Börse and the Dutch lender ABN Amro putting itself up for sale.

In its letter, TCI argued excessive executive compensation at VW resulted in poor management performance, which in turn meant its business had underperformed compared to European rivals.

“We urge the introduction of a new management remuneration system,” said TCI. “It should be submitted to a shareholder vote every year for formal approval. This will demonstrate a respect for investors and instil necessary alignment of shareholders and management.”

Among other things, TCI highlighted how VW had double the number of employees as Toyota but produced similar numbers of cars each year.

The hedge fund also said that since 2011 VW’s sales volumes, excluding its Chinese joint venture, had increased 8 per cent, while its overall wage bill had risen by more than 50 per cent over the same period.

The company’s 20-member supervisory board, which is meant to hold management to account, is split evenly between workers and shareholders. However, critics say there are no truly independent shareholder representatives.

Less than 11 per cent of VW’s voting shares are freely traded. According to VW’s annual report, at the end of last year the Porsche and Piëch families owned 52.2 per cent of the company’s voting shares, while the state of Lower Saxony - home to the carmaker’s Wolfsburg headquarters - had 20 per cent, and Qatar had 17 per cent.

TCI argued that VW’s “abuse” of its minority shareholders meant many had sold their stock, leaving the company significantly undervalued.

By taking on VW as a minority shareholder, TCI is hoping to convince other investors to back its campaign.

Christian Strenger, a German corporate governance expert, said that even before the emissions scandal VW shares historically traded at a 25 per cent discount to its peers, specifically because of investors’ concerns about its board structures.

“The supervisory board is the main point of irritation for all substantial long-term shareholders and debt holders from outside Germany, ” he said. “All the big ones say, ‘This should not go on’.”

‘I’m bad at haggling but very jealous of people who get great deals’ 00:00
Will daughter get CGT exemption for renting home in 2014? 16:18
Food intolerance group to double workforce as it expands 14:41
Chris Johns: Era of free money could be coming to an end 11:04
Higher food prices looming for Irish shoppers 11:01
Search executive
jobs on irishtimes.com