Hats off to Philip Treacy as profits rise 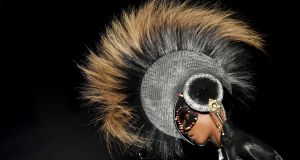 It’s hats off to Ireland’s master milliner, Philip Treacy as new accounts show that accumulated profits at his company last year increased to £371,251 (€429,852).

The Galway-born designer has achieved worldwide recognition with his hat designs and his client base includes Lady Gaga, Madonna, Beyoncé, David and Victoria Beckham and Sarah Jessica Parker.

Britain’s Duchess of Sussex, Meghan Markle, is also a fan and new accounts filed by Treacy’s London-based Philip Treacy Ltd show that the company’s accumulated profits increased by £15,435 to £371,251 in the 12 months to the end of June 30th last.

Speaking about his business last year in a BBC radio interview, Mr Treacy described the annual Royal Ascot races as “Christmas” for his company.

The 51-year old said: “People have to wear a hat, they can’t wear an excuse for a hat – that dreaded word, fascinator. It sounds like a dodgy sex toy. It’s a headband with a floppy flower in it.”

He went on to say: “A hat is plastic surgery for the face without the pain and a highly individual act of rebellion.”

The designer, who has worked for fashion houses such as Ralph Lauren and Givenchy, last year saw the cash pile at his company increase by £101,112 to £267,598.

The abridged accounts do not provide a revenue figure or salaries paid out during last year.

Mr Treacy was awarded an OBE in 2007 for services to the British fashion industry, having created bespoke headwear for iconic figures such as Valentino, Karl Lagerfeld, Ralph Lauren and Giorgio Armani.

He also designed pieces for the Harry Potter films and a number of the British royal family who attended the wedding of Prince William and Kate in 2011.

Treacy, who is originally from Ahascragh, Co Galway, made his first hat at the National College of Art and Design from a straw hat that he then sold to his tutor. He said: “I took it apart and made something else with it.”

Treacy said: “The mistake people make is to think a person wearing a hat is showing off when they are are just enjoying themselves.”

In 2010, Treacy was one of six contemporary, internationally renowned Irish fashion designers featured on a set of Irish stamps issued by An Post. Other designers celebrated included Paul Costelloe, Louise Kennedy, John Rocha and Orla Kiely.

Davy’s review; a new forestry venture; the loneliness of chief executives 06:30
Technology really can be stranger than fiction at times 05:30
Chris Horn: Board tips for start-up chief executives 05:29
Davy board to search for other potential cases of wrongdoing 05:23
Davy bows to Government pressure with statement 05:05
Search executive
jobs on irishtimes.com