Hedge fund to vote against Safran’s lower offer for Zodiac 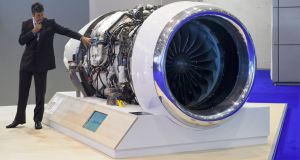 A visitor looks at the Safran turbojet engine at the European Business Aviation Convention and Exhibition Photograph: AFP

Activist hedge fund TCI will vote against Safran’s revised offer for Zodiac Aerospace even after a fiercely fought campaign against the deal in which the French company agreed to lower its offer and make changes to its corporate governance.

The defiant stance by TCI comes as the rise in Safran’s value in recent months has helped the $14 billion hedge fund to a 19.4 per cent gain net of fees this year, making it one of the best performing large funds in 2017.

Safran, a jet engine maker, intended to create a French national champion by buying Zodiac but said this week it would revise down its offer after the smaller aircraft equipment maker issued a string of profit warnings.

TCI, one of Europe’s largest activist investors, led by Sir Chris Hohn, had opposed the deal from the start, arguing the price was too high and would destroy value for Safran investors.

During an aggressive campaign Zodiac had threatened to sue TCI for €100 million for “disseminating its denigratory allegations on an unlimited geographical scale”, according to a writ it issued to the hedge fund.

After the revised terms were released, TCI said its governance concerns about the deal had been addressed. This included the structure of the shareholder vote on the deal, what it argued was preferential treatment of Zodiac’s largest investors, and a lack of independent board directors.

However, it still believes the deal is bad and will vote against it when put to Safran shareholders in June.

The hedge fund also said the headline 15 per cent reduction in Safran’s offer for Zodiac’s equity was in effect a 26 per cent reduction – from €9.5 billion to €7 billion – due to a change in the exchange ratio used to calculate how many shares in Safran each Zodiac investor would receive in the deal.

TCI is one of a small number of activist hedge funds that choose to fight high-profile battles in continental Europe, a geography avoided by many large activists due to a corporate governance structure that can provide more of an advantage to incumbent management teams over their investors than in other jurisdictions. – Copyright The Financial Times Limited 2017

1 Michael Smurfit: ‘I asked Trump to invite me to the White House for my 80th birthday’
2 ‘I’m so lucky to be in the Caribbean – a million miles from Derry Girls’
3 Small businesses are cannon fodder in zealous anti-virus experiment
4 Ryanair expects air fares to fall when flights take off again
5 ‘Never mind GDP; the most fundamental job of any leader is to keep his people alive’
6 Irish business of Carluccio’s restaurants to be wound up
7 Ireland stands to benefit in a big way from investing in public transport
8 Tax and the Pandemic Unemployment Payment: Your questions answered
9 Coronavirus: Technopath offers employers not-for-profit antibody tests
10 Household savings soar as consumers stop spending
Real news has value SUBSCRIBE